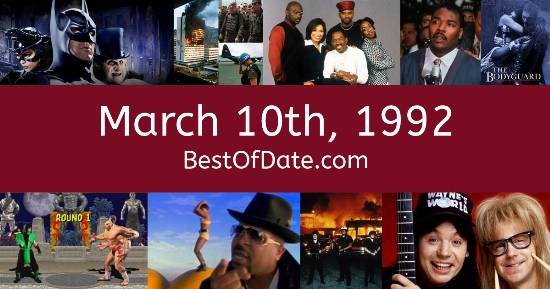 Songs that were on top of the music singles charts in the USA and the United Kingdom on March 10th, 1992:

The date is March 10th, 1992 and it's a Tuesday. Anyone born today will have the star sign Pisces. Spring has started to creep in and the days are beginning to get longer.

In America, the song To Be With You by Mr. Big is on top of the singles charts. Over in the UK, Stay by Shakespears Sisters is the number one hit song. George W. Bush Snr. is currently the President of the United States and the movie Medicine Man is at the top of the Box Office.

It's 1992, so radio stations are being dominated by the likes of Kris Kross, Boyz II Men, Whitney Houston, Sir Mix-a-Lot, Right Said Fred, Snap! and Nirvana. In Australia and New Zealand, the 1992 Cricket World Cup is currently taking place. A new sci-fi film called "The Lawnmower Man" has just been released in movie theaters.

The trial of four police officers for the 1991 beating of Rodney King back is currently taking in Simi Valley, California. On TV, people are watching popular shows such as "Murder, She Wrote", "Beverly Hills, 90210", "The Ren & Stimpy Show" and "Rugrats". Meanwhile, gamers are playing titles such as "Streets of Rage", "The Legend of Zelda: A Link to the Past", "Super Castlevania IV" and "Civilization".

Kids and teenagers are watching TV shows such as "Mister Rogers' Neighborhood", "Beverly Hills, 90210", "Darkwing Duck" and "The Adventures of Tintin". If you're a kid or a teenager, then you're probably playing with toys such as "Easy-Bake Oven", "My Little Pony (figures)", "Micro Machines" and "Pogs".

Who was the Prime Minister of the United Kingdom on March 10th, 1992?

Enter your date of birth below to find out how old you were on March 10th, 1992.

Looking for some nostalgia? Here are some Youtube videos relating to March 10th, 1992. Please note that videos are automatically selected by Youtube and that results may vary! Click on the "Load Next Video" button to view the next video in the search playlist. In many cases, you'll find episodes of old TV shows, documentaries, music videos and soap dramas.