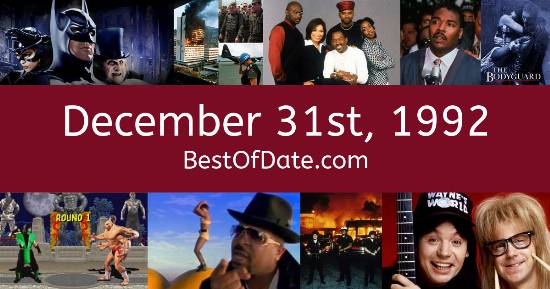 Songs that were on top of the music singles charts in the USA and the United Kingdom on December 31st, 1992:

The date is December 31st, 1992 and it's a Thursday. Anyone born today will have the star sign Capricorn. It's News Years Eve and everyone is looking forward to what the year 1993 will bring them.

In Europe, a war is continuing to rage on in Bosnia and Herzegovina. In soccer, Dutch striker Marco van Basten has recently won the 1992 Ballon d'Or. van Basten beat out contenders such as Hristo Stoichkov and Dennis Bergkamp. The film "Scent of a Woman", starring Al Pacino, has just been released in movie theaters.

On TV, people are watching popular shows such as "Last of the Summer Wine", "The Wonder Years", "Quantum Leap" and "Home Improvement". Meanwhile, gamers are playing titles such as "F-16 Combat Pilot", "Ecco the Dolphin", "Mortal Kombat" and "Final Fantasy V". Children and teenagers are currently watching television shows such as "Thomas the Tank Engine", "The Fresh Prince of Bel-Air", "Rugrats" and "Home Improvement".

Celebrities, historical figures and noteable people who were born on the 31st of December:

National holidays and famous events that fall on the 31st of December:

Who was the Prime Minister of the United Kingdom on December 31st, 1992?

Enter your date of birth below to find out how old you were on December 31st, 1992.

Looking for some nostalgia? Here are some Youtube videos relating to December 31st, 1992. Please note that videos are automatically selected by Youtube and that results may vary! Click on the "Load Next Video" button to view the next video in the search playlist. In many cases, you'll find episodes of old TV shows, documentaries, music videos and soap dramas.

Here are some fun statistics about December 31st, 1992.