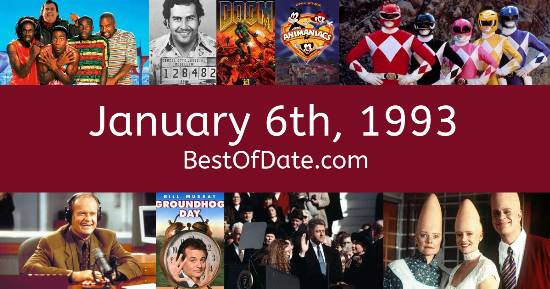 Songs that were on top of the music singles charts in the USA and the United Kingdom on January 6th, 1993.

The date is January 6th, 1993 and it's a Wednesday. Anyone born today will have the star sign Capricorn. People are starting to return back to work and school after the Christmas holidays.

The song I Will Always Love You by Whitney Houston is on top of the singles charts in both the USA and the United Kingdom. George W. Bush Snr. is currently the President of the United States and the movie Aladdin is at the top of the Box Office. In the United Kingdom, John Major is the current Prime Minister.

Meanwhile, the country of Czechoslovakia has officially broken up into two separate countries: Slovakia and the Czech Republic. It's 1993, so radio stations are being dominated by the likes of Meat Loaf, UB40, Snow, Haddaway, Whitney Houston, Take That, Janet Jackson and Mariah Carey. In the NFL, the Buffalo Bills have recently pulled off a historic comeback, overcoming a 32-point deficit to defeat the Houston Oilers by 41-38 in overtime.

A new sci-fi series called "Star Trek: Deep Space Nine" has just been aired on television. In Rochester, New York, over $7 million dollars has been stolen from a Brink's Armored Car Depot. If you were to travel back to this day, notable figures such as Audrey Hepburn, Thurgood Marshall, Andre the Giant and Bobby Moore would all be still alive.

On TV, people are watching popular shows such as "Sherlock Holmes", "Murder, She Wrote", "Married... with Children" and "One Foot in the Grave". Meanwhile, gamers are playing titles such as "Desert Strike ", "Street Fighter II: The World Warrior", "Evander Holyfield's Real Deal Boxing" and "Super Mario Land 2: 6 Golden Coins". Children and teenagers are currently watching television shows such as "Dink, the Little Dinosaur", "In Living Color", "Rugrats" and "Batman: The Animated Series".

If you're a kid or a teenager, then you're probably playing with toys such as the Easy-Bake Oven, Jenga, Yo-yo and the SEGA Game Gear.

If you are looking for some childhood nostalgia, then check out January 6th, 1999 instead.

George W. Bush Snr. was the President of the United States on January 6th, 1993.

John Major was the Prime Minister of the United Kingdom on January 6th, 1993.

Enter your date of birth below to find out how old you were on January 6th, 1993.

Here are some fun statistics about January 6th, 1993.