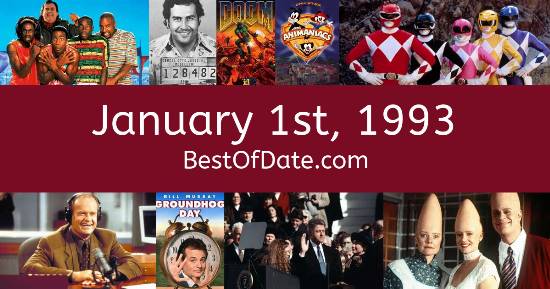 Songs that were on top of the music singles charts in the USA and the United Kingdom on January 1st, 1993.

The date is January 1st, 1993 and it's a Friday. Anyone born today will have the star sign Capricorn. Currently, people have "that Friday feeling" and are looking forward to the weekend.

It's New Years Day, the official start of the year 1993. A lot of people are relaxing at home. Others are nursing hangovers from the night before. The song I Will Always Love You by Whitney Houston is on top of the singles charts in both the USA and the United Kingdom. George W. Bush Snr. is currently the President of the United States and the movie Aladdin is at the top of the Box Office.

A playing discs game called "Pogs" is currently spreading in popularity throughout the world. Meanwhile, the country of Czechoslovakia has officially broken up into two separate countries: Slovakia and the Czech Republic. It's 1993, so radio stations are being dominated by the likes of Meat Loaf, UB40, Snow, Haddaway, Whitney Houston, Take That, Janet Jackson and Mariah Carey.

If you were to travel back to this day, notable figures such as Audrey Hepburn, Thurgood Marshall, Andre the Giant and Bobby Moore would all be still alive. On TV, people are watching popular shows such as "Murder, She Wrote", "Matlock", "Family Matters" and "Dinosaurs". Meanwhile, gamers are playing titles such as "Desert Strike ", "Teenage Mutant Ninja Turtles III: The Manhattan Project", "Kirby's Dream Land" and "Tecmo NBA Basketball".

Kids and teenagers are watching TV shows such as "Adventures of the Little Koala", "Are You Afraid of the Dark?", "Home Improvement" and "X-Men: The Animated Series". If you're a kid or a teenager, then you're probably playing with toys such as Cabbage Patch Kids, Pogo ball / Lolo ball, the Game Boy and Polly Pocket.

If you are looking for some childhood nostalgia, then check out January 1st, 1999 instead.

George W. Bush Snr. was the President of the United States on January 1st, 1993.

John Major was the Prime Minister of the United Kingdom on January 1st, 1993.

Enter your date of birth below to find out how old you were on January 1st, 1993.

Here are some fun statistics about January 1st, 1993.