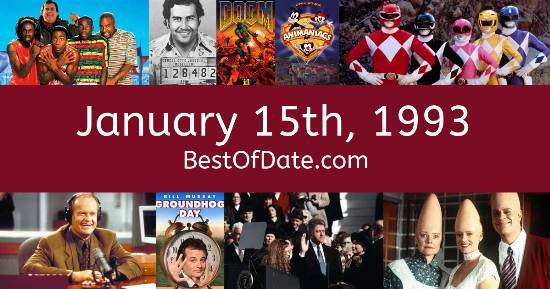 These songs were on top of the music charts in the United States and the United Kingdom on January 15th, 1993.

The movie "A Few Good Men" was at the top of the Box Office on this day.

The date is January 15th, 1993, and it's a Friday. Anyone born today will have the star sign Capricorn. Currently, people have "that Friday feeling" and are looking forward to the weekend.

The Christmas holiday season is long over, the decorations have been taken down and a sense of normality has returned. The song I Will Always Love You by Whitney Houston is on top of the singles charts in both the USA and the United Kingdom. George W. Bush Snr. is currently the President of the United States, and the movie A Few Good Men is at the top of the Box Office.

A playing discs game called "Pogs" is currently spreading in popularity throughout the world. It's 1993, so radio stations are being dominated by the likes of Meat Loaf, UB40, Snow, Haddaway, Whitney Houston, Take That, Janet Jackson and Mariah Carey. A new sci-fi series called "Star Trek: Deep Space Nine" has just been aired on television.

In music news, the soundtrack for "The Bodyguard" has broken a new record by selling 1 million copies in one week in the USA. In wrestling, the WWF has launched a new TV program called "Monday Night Raw". The new show will replace "Prime Time Wrestling", which had been running for eight years. In Ireland, Albert Reynolds has recently been elected Taoiseach. His party Fianna Fáil have now formed a coalition with the Labour Party following the results of the general election in November of last year.

Despite announcing their separation over a month ago, details about the break-up of Princess Diana and Prince Charles are still receiving widespread media attention. Recently, transcripts of an explicit phone call between Prince Charles and Camilla Shand became front page news all across the world. In celebrity news, singer Bobby Brown has just been cited by police in Augusta, Georgia, USA for simulating a sex act onstage. The citation comes at a time when Brown and his wife Whitney Houston are expecting their first child. A new survival drama film called "Alive" has just been released in movie theaters. The movie tells the story about the Uruguayan rugby team's plane crash in the Andes in 1972.

If you were to travel back to this day, notable figures such as Audrey Hepburn, Thurgood Marshall, Andre the Giant and Bobby Moore would all be still alive. On TV, people are watching popular shows such as "Sherlock Holmes", "Full House", "Seinfeld" and "Star Trek: Deep Space Nine". Meanwhile, gamers are playing titles such as "Desert Strike ", "The Legend of Zelda: A Link to the Past", "Yoshi" and "Kirby's Dream Land".

Children and teenagers are currently watching television shows such as "Pingu", "The Wonder Years", "Round the Twist" and "Are You Afraid of the Dark?". If you're a kid or a teenager, then you're probably playing with toys such as the Ghostbusters Proton Pack, Polly Pocket, the Super Nintendo Entertainment System (SNES) and Nerf Blaster.

These are trending news stories and fads that were prevalent at this time. These are topics that would have been in the media on January 15th, 1993.

News stories and other events that happened around January 15th, 1993.

Check out our personality summary for people who were born on January 15th, 1993.

If you are looking for some childhood nostalgia, then you should check out January 15th, 1999 instead.

George W. Bush Snr. was the President of the United States on January 15th, 1993.

John Major was the Prime Minister of the United Kingdom on January 15th, 1993.

Find out what your age was on January 15th, 1993, by entering your DOB below.
This information is not saved on our server.

Here are some fun statistics about January 15th, 1993.