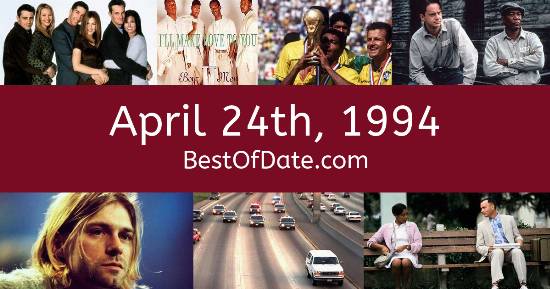 Songs that were on top of the music singles charts in the USA and the United Kingdom on April 24th, 1994.

The date is April 24th, 1994 and it's a Sunday. Anyone born today will have the star sign Taurus. Currently, people are enjoying their weekend.

The summer of 1994 is drawing closer and temperatures have started to rise. In America, the song Bump N' Grind by R. Kelly is on top of the singles charts. Over in the UK, Everything Changes by Take That is the number one hit song.

Bill Clinton is currently the President of the United States and the movie Bad Girls is at the top of the Box Office. In the United Kingdom, John Major is the current Prime Minister. Meanwhile, in technology news, a relatively new storage format called the CD is beginning to outpace the regular cassette tape in music sales. The disc-based format gives listeners the ability to skip between songs instead of having to manually rewind and forward.

On the continent of Africa, a horrible event is unfolding, as the Hutu majority in Rwanda attempt to wipe out the Tutsi minority. This genocide began following the assassination of President Juvenal Habyarimana. Meanwhile, actress Roseanne Barr has filed for divorce from Tom Arnold after four years of marriage. In South Africa, the country has adopted its new national flag.

Former U.S. President Richard Nixon has passed away four days after suffering from a stroke. He was 81 years old. On TV, people are watching popular shows such as "Last of the Summer Wine", "Full House", "Hangin' with Mr. Cooper" and "Mighty Morphin Power Rangers". Meanwhile, gamers are playing titles such as "Mortal Kombat II", "Myst", "Disney's Aladdin" and "Doom".

Children and teenagers are currently watching television shows such as "Rugrats", "The Animals of Farthing Wood", "Living Single" and "Tales from the Cryptkeeper". If you're a kid or a teenager, then you're probably playing with toys such as Sylvanian Families, Micro Machines, the Game Boy and Action Man.

If you are looking for some childhood nostalgia, then check out April 24th, 2000 instead.

Celebrities, historical figures and notable people who were born on the 24th of April.

Bill Clinton was the President of the United States on April 24th, 1994.

John Major was the Prime Minister of the United Kingdom on April 24th, 1994.

Enter your date of birth below to find out how old you were on April 24th, 1994.