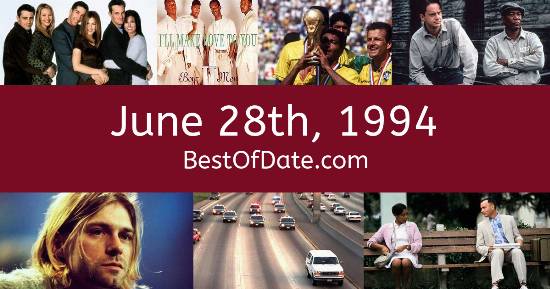 Songs that were on top of the music singles charts in the USA and the United Kingdom on June 28th, 1994.

The date is June 28th, 1994 and it's a Tuesday. Anyone born today will have the star sign Cancer. It's summer, so the temperatures are warmer and the evenings are longer than usual.

In America, the song I Swear by All-4-One is on top of the singles charts. Over in the UK, Love Is All Around by Wet Wet Wet is the number one hit song. Bill Clinton is currently the President of the United States and the movie Wolf is at the top of the Box Office.

In the United States, the 1994 FIFA World Cup is being held. In basketball, the Houston Rockets have won the 1994 NBA Finals after defeating the New York Knicks 4-3. Former NFL star O.J. Simpson has pleaded "Not Guilty" to the murders of Nicole Brown Simpson and Ronald Goldman. Simpson was arrested earlier this month for the murders after he led police in Los Angeles on a highly-televised chase in his white Ford Bronco.

A new animated film called "The Lion King" has just been released in movie theaters. In Germany, the final Russian troops have left the country. This marks a final end to Russian occupation after nearly 50 years. In Japan, 8 people have lost their lives following a sarin gas attack by the Aum Shinrikyo doomsday cult. The attack took place in a quiet neighborhood in Matsumoto, Nagano.

On TV, people are watching popular shows such as "Family Matters", "Clarissa Explains It All", "Melrose Place" and "Mighty Morphin Power Rangers". Meanwhile, gamers are playing titles such as "Shinobi III: Return of the Ninja Master", "Gunstar Heroes", "NBA Jam" and "Disney's Aladdin". Kids and teenagers are watching TV shows such as "Married... with Children", "Dinosaurs", "Taz-Mania" and "Rocko's Modern Life".

Popular toys at the moment include the likes of the Easy-Bake Oven, Micro Machines, Littlest Pet Shop and Mighty Max.

If you are looking for some childhood nostalgia, then check out June 28th, 2000 instead.

Bill Clinton was the President of the United States on June 28th, 1994.

John Major was the Prime Minister of the United Kingdom on June 28th, 1994.