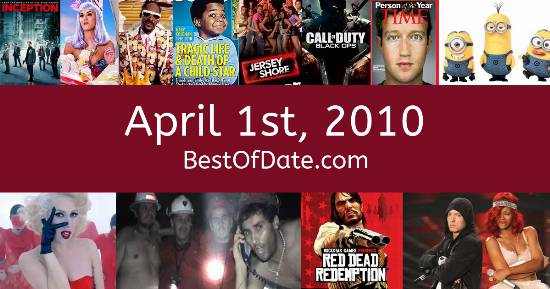 Songs that were on top of the music singles charts in the USA and the United Kingdom on April 1st, 2010.

The date is April 1st, 2010 and it's a Thursday. Anyone born today will have the star sign Aries. It is April Fool's Day, which means that people are playing practical jokes on one another.

The summer of 2010 is drawing closer and temperatures have started to rise. In America, the song Rude Boy by Rihanna is on top of the singles charts. Over in the UK, Telephone by Lady GaGa ft Beyonce is the number one hit song.

The slang phrase "Come at me bro" is starting to become popular on the Internet. A South Korean Navy ship carrying 104 personnel has sank off the west coast of South Korea, leaving 46 sailors dead. North Korea are currently being blamed for the sinking. French DJ David Guetta has released a new single called "Memories", featuring rapper Kid Cudi.

Puerto Rican singer Ricky Martin has come out and announced that he is gay. Monster Garage host Jesse James has publicly apologized to his actress wife Sandra Bullock for being unfaithful to her. His publicist has also announced that James will be checking into a rehabilitation facility in the hope of solving his personal issues and saving his marriage. If you were to travel back to this day, notable figures such as Chris Kanyon, Paul Gray, Gary Coleman and Lance Cade would all be still alive.

On TV, people are watching popular shows such as "How I Met Your Mother", "The Hills", "Sons of Anarchy" and "Community". Meanwhile, gamers are playing titles such as "Mafia Wars", "Pokémon Platinum", "Minecraft" and "Mass Effect 2". Children and teenagers are currently watching television shows such as "Go, Diego, Go!", "Phineas and Ferb", "The Suite Life on Deck" and "Victorious".

If you're a kid or a teenager, then you're probably playing with toys such as the PlayStation 3, Iggle Piggle, the KidiZoom Camera and ZhuZhu Pets.

If you are looking for some childhood nostalgia, then check out April 1st, 2016 instead.

Barack Obama was the President of the United States on April 1st, 2010.

Gordon Brown was the Prime Minister of the United Kingdom on April 1st, 2010.

Enter your date of birth below to find out how old you were on April 1st, 2010.

Here are some fun statistics about April 1st, 2010.