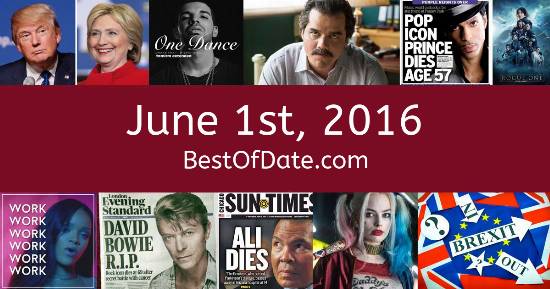 Songs that were on top of the music singles charts in the USA and the United Kingdom on June 1st, 2016.

The date is June 1st, 2016, and it's a Wednesday. Anyone born today will have the star sign Gemini. It's summer, so the temperatures are warmer and the evenings are longer than usual.

In America, the song Can't Stop the Feeling! by Justin Timberlake is on top of the singles charts. Over in the UK, One Dance by Drake is the number one hit song. Barack Obama is currently the President of the United States, and the movie X-Men: Apocalypse is at the top of the Box Office.

In the United Kingdom, David Cameron is the current Prime Minister. It's 2016, so the music charts are being dominated by artists such as Drake, Lukas Graham, Sia, Mike Posner, The Chainsmokers and Calvin Harris. Donald Trump has just become the Republican nominee for the 2016 presidential election.

Portuguese manager Jose Mourinho has just been named as the new coach of Manchester United. Spanish side Real Madrid have won the 2016 UEFA Champions League after defeating rivals Atletico Madrid on penalties. The recent shooting of a gorilla called Harambe at Cincinnati Zoo has sparked global publicity and controversy.

Taylor Swift and Calvin Harris have split up after dating for 15 months. If you were to travel back to this day, notable figures such as Muhammad Ali, Kimbo Slice, Christina Grimmie and Fidel Castro would all be still alive. On TV, people are watching popular shows such as "The Vampire Diaries", "Homeland", "Peaky Blinders" and "Better Call Saul".

Meanwhile, gamers are playing titles such as "Lego Jurassic World", "Halo 5: Guardians", "Rise of the Tomb Raider" and "Overwatch". Kids and teenagers are watching TV shows such as "Dora the Explorer", "The Fairly OddParents", "Mickey Mouse Clubhouse" and "The Loud House". Popular toys at the moment include the likes of the PlayStation 4, the Xbox One, Barbie Saddle n Ride and Star Wars BB-8 toy droid.

These are trending news stories and fads that were prevalent at this time. These are topics that would have been in the media on June 1st, 2016.

News stories and other events that happened around June 1st, 2016.

Check out our personality summary for people who were born on June 1st, 2016.

Barack Obama was the President of the United States on June 1st, 2016.

David Cameron was the Prime Minister of the United Kingdom on June 1st, 2016.

Find out what your age was on June 1st, 2016, by entering your DOB below.
This information is not saved on our server.

Here are some fun statistics about June 1st, 2016.