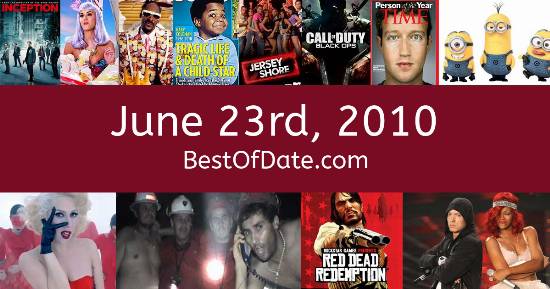 Songs that were on top of the music singles charts in the USA and the United Kingdom on June 23rd, 2010.

The date is June 23rd, 2010 and it's a Wednesday. Anyone born today will have the star sign Cancer. It's summer, so the temperatures are warmer and the evenings are longer than usual.

In America, the song California Gurls by Katy Perry is on top of the singles charts. Over in the UK, Shout by Shout for England is the number one hit song. Barack Obama is currently the President of the United States and the movie The Karate Kid is at the top of the Box Office.

It's 2010, so the music charts are being dominated by artists such as Kesha, Katy Perry, Rihanna, Eminem and Bruno Mars. In South Africa, the 2010 FIFA World Cup is currently taking place and stadiums are being filled with the sound of vuvuzelas. AOL have sold their struggling social network "Bebo" to Criterion Capital Partners. Like many social networks, the site has found it difficult to compete with the rising popularity of Facebook. AOL's decision to buy Bebo in 2008 for $850 million has been described as one of the worst deals ever made in the dotcom era.

In basketball, the Los Angeles Lakers have just won the 2010 NBA Finals by beating the Boston Celtics in the seventh game. The animated film "Toy Story 3" has just been released in movie theaters. Rapper Eminem has just released his album "Recovery".

On TV, people are watching popular shows such as "Smallville", "Two and a Half Men", "The Office" and "Bones". Meanwhile, gamers are playing titles such as "Halo 3: ODST", "Assassin's Creed II", "Battlefield: Bad Company 2" and "Red Dead Redemption". Children and teenagers are currently watching television shows such as "LazyTown", "Go, Diego, Go!", "iCarly" and "Glee".

If you are looking for some childhood nostalgia, then check out June 23rd, 2016 instead.

Barack Obama was the President of the United States on June 23rd, 2010.

David Cameron was the Prime Minister of the United Kingdom on June 23rd, 2010.