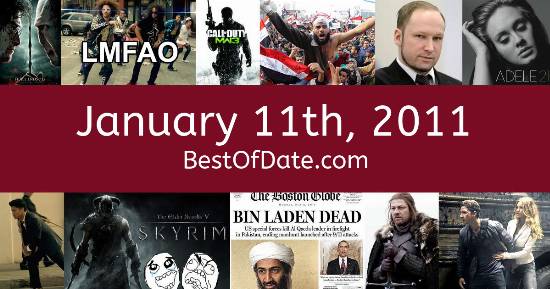 These songs were on top of the music charts in the United States and the United Kingdom on January 11th, 2011.

The movie "True Grit" was at the top of the Box Office on this day.

The date is January 11th, 2011, and it's a Tuesday. Anyone born today will have the star sign Capricorn. The Christmas holiday season is long over, the decorations have been taken down and a sense of normality has returned.

In America, the song Grenade by Bruno Mars is on top of the singles charts. Over in the UK, What's My Name by Rihanna ft Drake is the number one hit song. Barack Obama is currently the President of the United States, and the movie True Grit is at the top of the Box Office.

Lionel Messi has been awarded the 2010 FIFA Ballon d'Or, beating out Barcelona teammates Xavi and Andrés Iniesta. If you were to travel back to this day, notable figures such as Nate Dogg, Elizabeth Taylor, Randy Savage and Ryan Dunn would all be still alive. On TV, people are watching popular shows such as "CSI: NY", "How I Met Your Mother", "The Vampire Diaries" and "Jersey Shore".

Meanwhile, gamers are playing titles such as "Farmville", "Battlefield: Bad Company 2", "Halo: Reach" and "Fallout: New Vegas". Children and teenagers are currently watching television shows such as "Johnny Test", "WordGirl", "Wizards of Waverly Place" and "Victorious". If you're a kid or a teenager, then you're probably playing with toys such as the PlayStation 3, the KidiZoom Camera, ZhuZhu Pets and the iPad.

These are trending news stories and fads that were prevalent at this time. These are topics that would have been in the media on January 11th, 2011.

News stories and other events that happened around January 11th, 2011.

Check out our personality summary for people who were born on January 11th, 2011.

If you are looking for some childhood nostalgia, then you should check out January 11th, 2017 instead.

Barack Obama was the President of the United States on January 11th, 2011.

David Cameron was the Prime Minister of the United Kingdom on January 11th, 2011.

Find out what your age was on January 11th, 2011, by entering your DOB below.
This information is not saved on our server.

Here are some fun statistics about January 11th, 2011.