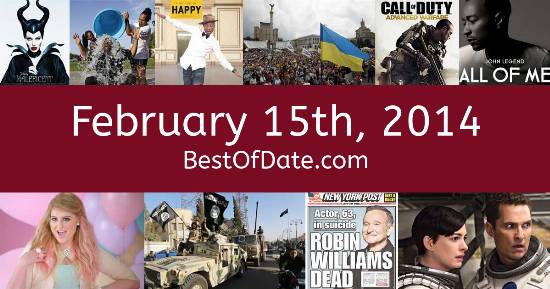 Songs that were on top of the music singles charts in the USA and the United Kingdom on February 15th, 2014.

The date is February 15th, 2014 and it's a Saturday. Anyone born today will have the star sign Aquarius. Currently, people are enjoying their weekend.

Valentine's Day of 2014 has just passed. In America, the song Dark Horse by Katy Perry featuring Juicy J is on top of the singles charts. Over in the UK, Rather Be by Clean Bandit featuring Jess Glynne is the number one hit song.

Barack Obama is currently the President of the United States and the movie Ride Along is at the top of the Box Office. In the United Kingdom, David Cameron is the current Prime Minister. Video rental stores such as Blockbuster are continuing to close their doors at the moment. This is due to the increasing popularity of online streaming services such as Netflix and Hulu.

A social networking website called Vine is extremely popular at the moment. A new Internet meme called "Doge", which consists of an image of a Shiba Inu dog with broken English written on it, is being shared online at the moment. It is 2014, so the music charts are being dominated by artists such as Pharrell Williams, Katy Perry, John Legend, Iggy Azalea, Meghan Trainor, Lorde and Jason Derulo.

The 2014 Winter Olympics are currently taking place in Sochi, Russia. The event has renewed debate about Russia's LGBT abuses and there is controversy surrounding Sochi's lack of preparedness. Actress Shirley Temple has passed away at the age of 85. Social media is reacting to actress Ellen Page's announcement that she is gay.

If you are looking for some childhood nostalgia, then check out February 15th, 2020 instead.

Celebrities, historical figures and notable people who were born on the 15th of February.

Barack Obama was the President of the United States on February 15th, 2014.

David Cameron was the Prime Minister of the United Kingdom on February 15th, 2014.

Enter your date of birth below to find out how old you were on February 15th, 2014.

Here are some fun statistics about February 15th, 2014.