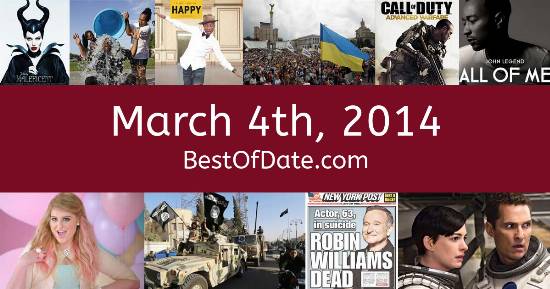 Songs that were on top of the music singles charts in the USA and the United Kingdom on March 4th, 2014.

The date is March 4th, 2014, and it's a Tuesday. Anyone born today will have the star sign Pisces. Spring has started to creep in and the days are beginning to get longer.

In America, the song Dark Horse by Katy Perry featuring Juicy J is on top of the singles charts. Over in the UK, Money on My Mind by Sam Smith is the number one hit song. Barack Obama is currently the President of the United States, and the movie Non-Stop is at the top of the Box Office.

It is 2014, so the music charts are being dominated by artists such as Pharrell Williams, Katy Perry, John Legend, Iggy Azalea, Meghan Trainor, Lorde and Jason Derulo. A new Internet slang phrase called "Sliding into your DMs" is becoming popular at the moment. Matthew McConaughey has just won an Oscar for his role as Ron Woodroof in the movie Dallas Buyers Club.

If you were to travel back to this day, notable figures such as Peaches Geldof, The Ultimate Warrior, Robin Williams and Richard Attenborough would all be still alive. On TV, people are watching popular shows such as "Bones", "Modern Family", "The Walking Dead" and "Game of Thrones". Meanwhile, gamers are playing titles such as "Pokémon X and Y", "Batman: Arkham Origins", "Call of Duty: Ghosts" and "DayZ".

Kids and teenagers are watching TV shows such as "Lab Rats: Bionic Island", "Doc McStuffins", "Dog with a Blog" and "Paw Patrol". Popular toys at the moment include the likes of Rainbow Loom, the Furby Boom, the Xbox One and Frozen dolls.

These are trending news stories and fads that were prevalent at this time. These are topics that would have been in the media on March 4th, 2014.

Check out our personality summary for people who were born on March 4th, 2014.

Television shows that people were watching in March, 2014.

Popular video games that people were playing in March of 2014.

If you are looking for some childhood nostalgia, then you should check out March 4th, 2020 instead.

Barack Obama was the President of the United States on March 4th, 2014.

Enter your date of birth below to find out how old you were on March 4th, 2014.
This information is not transmitted to our server.

Here are some fun statistics about March 4th, 2014.