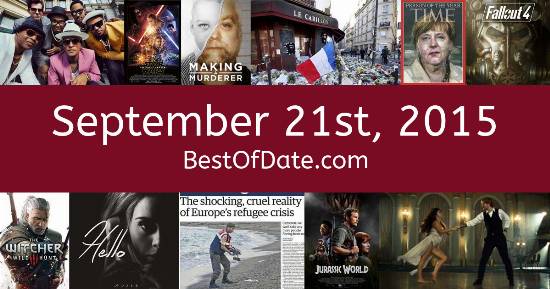 September 21st, 2015 relates to a fictional event in a movie, book, game or television series.

Songs that were on top of the music singles charts in the USA and the United Kingdom on September 21st, 2015.

The movie "Maze Runner: The Scorch Trials" was at the top of the box office on September 21st, 2015.

The date is September 21st, 2015 and it's a Monday. Anyone born today will have the star sign Virgo. Schools have started back and autumn has arrived, so temperatures have started to cool and trees are beginning to shed their leaves.

The earthy smells of fall have started to fill the air. In America, the song What Do You Mean? by Justin Bieber is on top of the singles charts. Over in the UK, Easy Love by Sigala is the number one hit song.

Barack Obama is currently the President of the United States and the movie Maze Runner: The Scorch Trials is at the top of the Box Office. In the United Kingdom, David Cameron is the current Prime Minister. A social networking website called Vine is extremely popular at the moment.

It's 2015, so the music charts are being dominated by the likes of OMI, Bruno Mars, Ellie Goulding, Adele, Justin Bieber and Hozier. In Australia, Malcolm Turnbull has become the new Prime Minister after defeating Tony Abbott in a leadership ballot. Singer Lukas Graham has just released his new song "7 Years".

The 2015 Rugby World Cup is currently taking place in England. On TV, people are watching popular shows such as "Bones", "The Walking Dead", "House of Cards" and "Jane the Virgin". Meanwhile, gamers are playing titles such as "Call of Duty: Advanced Warfare", "Far Cry 4", "Rocket League" and "Call of Duty: Black Ops III".

Children and teenagers are currently watching television shows such as "Dora the Explorer", "Lab Rats: Bionic Island", "Paw Patrol" and "Henry Danger". If you're a kid or a teenager, then you're probably playing with toys such as the PlayStation 4, the Xbox One and Star Wars BB-8 toy droid.

Celebrities, historical figures and notable people who were born on the 21st of September.

Barack Obama was the President of the United States on September 21st, 2015.

David Cameron was the Prime Minister of the United Kingdom on September 21st, 2015.

Enter your date of birth below to find out how old you were on September 21st, 2015.

Here are some fun statistics about September 21st, 2015.