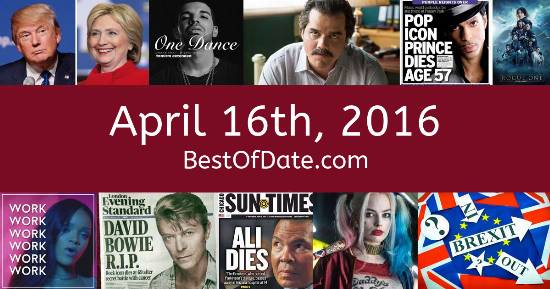 These songs were on top of the music charts in the United States and the United Kingdom on April 16th, 2016.

The movie "The Boss" was at the top of the Box Office on this day.

The date is April 16th, 2016, and it's a Saturday. Anyone born today will have the star sign Aries. Currently, people are enjoying their weekend.

Barack Obama is currently the President of the United States, and the movie The Boss is at the top of the Box Office. In the United Kingdom, David Cameron is the current Prime Minister. It's 2016, so the music charts are being dominated by artists such as Drake, Lukas Graham, Sia, Mike Posner, The Chainsmokers and Calvin Harris.

English soccer side Aston Villa have been relegated from the Premier League after 24 years in the top flight. If you were to travel back to this day, notable figures such as Chyna, Prince, Muhammad Ali and Kimbo Slice would all be still alive. On TV, people are watching popular shows such as "The Vampire Diaries", "Homeland", "American Horror Story" and "Peaky Blinders".

Meanwhile, gamers are playing titles such as "Batman: Arkham Knight", "Metal Gear Solid V: The Phantom Pain", "Assassin's Creed Syndicate" and "Just Cause 3". Kids and teenagers are watching TV shows such as "Agents of S.H.I.E.L.D.", "Sheriff Callie's Wild West", "Girl Meets World" and "Bunnicula". If you're a kid or a teenager, then you're probably playing with toys such as the PlayStation 4, the Xbox One, Barbie Saddle n Ride and Star Wars BB-8 toy droid.

These are trending news stories and fads that were prevalent at this time. These are topics that would have been in the media on April 16th, 2016.

Check out our personality summary for people who were born on April 16th, 2016.

Celebrities, historical figures and other notable people who were born on April 16th.

Latin singer. Deceased
Born on April 16th, 1971
She was not alive on this date.

Barack Obama was the President of the United States on April 16th, 2016.

David Cameron was the Prime Minister of the United Kingdom on April 16th, 2016.

Enter your date of birth below to find out how old you were on April 16th, 2016.
This information is not transmitted to our server.