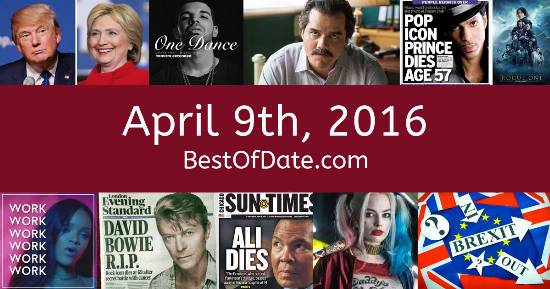 These songs were on top of the music charts in the United States and the United Kingdom on April 9th, 2016.

The movie "Batman v Superman: Dawn of Justice" was at the top of the Box Office on April 9th, 2016.

The date is April 9th, 2016, and it's a Saturday. Anyone born today will have the star sign Aries. Currently, people are enjoying their weekend.

Barack Obama is currently the President of the United States, and the movie Batman v Superman: Dawn of Justice is at the top of the Box Office. In the United Kingdom, David Cameron is the current Prime Minister. It's 2016, so the music charts are being dominated by artists such as Drake, Lukas Graham, Sia, Mike Posner, The Chainsmokers and Calvin Harris.

The 2016 Republican Party presidential primaries have become a three-horse race between Donald Trump, Ted Cruz and John Kasich. Meanwhile, Hillary Clinton and Bernie Sanders are battling it out to become the presidential nominee for the Democratic Party. The Panama Papers have just been leaked. The leak contains 11.5 million documents relating to offshore entities. Rob Kardashian and Blac Chyna have just announced on Instagram that they are engaged.

Trent Harmon has just won the 15th season of American Idol. If you were to travel back to this day, notable figures such as Chyna, Prince, Muhammad Ali and Kimbo Slice would all be still alive. On TV, people are watching popular shows such as "Homeland", "Black Mirror", "House of Cards" and "Power".

Meanwhile, gamers are playing titles such as "The Sims 4", "The Witness", "XCOM 2" and "Firewatch". Children and teenagers are currently watching television shows such as "Horrid Henry", "The Thundermans", "Girl Meets World" and "Nicky, Ricky, Dicky & Dawn". Popular toys at the moment include the likes of the PlayStation 4, the Xbox One, Barbie Saddle n Ride and Star Wars BB-8 toy droid.

These are trending news stories and fads that were prevalent at this time. These are topics that would have been in the media on April 9th, 2016.

News stories and other events that happened around April 9th, 2016.

Check out our personality summary for people who were born on April 9th, 2016.

Barack Obama was the President of the United States on April 9th, 2016.

David Cameron was the Prime Minister of the United Kingdom on April 9th, 2016.

Find out what your age was on April 9th, 2016, by entering your DOB below.
This information is not saved on our server.

Here are some fun statistics about April 9th, 2016.