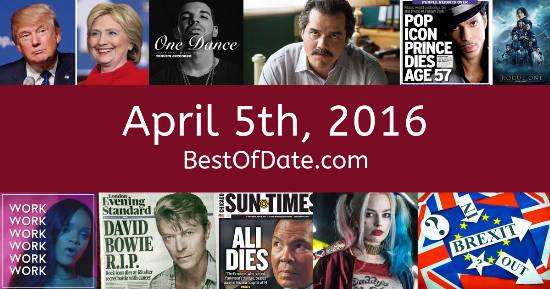 Songs that were on top of the music singles charts in the USA and the United Kingdom on April 5th, 2016.

The movie "Batman v Superman: Dawn of Justice" was at the top of the Box Office on April 5th, 2016.

The date is April 5th, 2016, and it's a Tuesday. Anyone born today will have the star sign Aries. The summer of 2016 is drawing closer and temperatures have started to rise.

The Panama Papers have just been leaked. The leak contains 11.5 million documents relating to offshore entities. Rob Kardashian and Blac Chyna have just announced on Instagram that they are engaged. If you were to travel back to this day, notable figures such as Chyna, Prince, Muhammad Ali and Kimbo Slice would all be still alive.

On TV, people are watching popular shows such as "The Vampire Diaries", "Modern Family", "Orange Is the New Black" and "Jane the Virgin". Meanwhile, gamers are playing titles such as "Dying Light", "Rocket League", "XCOM 2" and "Firewatch". Kids and teenagers are watching TV shows such as "Mickey Mouse Clubhouse", "Agents of S.H.I.E.L.D.", "The Thundermans" and "Sheriff Callie's Wild West".

These are trending news stories and fads that were prevalent at this time. These are topics that would have been in the media on April 5th, 2016.

News stories and other events that happened around April 5th, 2016.

Check out our personality summary for people who were born on April 5th, 2016.

Actress. Deceased
Born on April 5th, 1908
She was not alive on this date.

American actress. Deceased
Born on April 5th, 1962
She was not alive on this date.

Barack Obama was the President of the United States on April 5th, 2016.

David Cameron was the Prime Minister of the United Kingdom on April 5th, 2016.

Find out what your age was on April 5th, 2016, by entering your DOB below.
This information is not saved on our server.

Here are some fun statistics about April 5th, 2016.