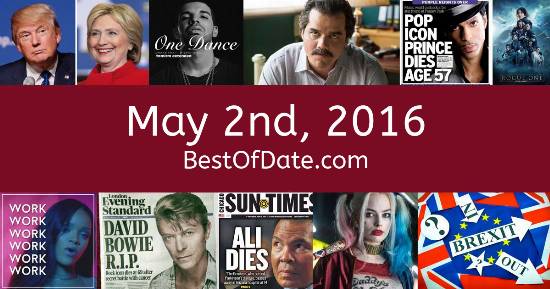 Songs that were on top of the music singles charts in the USA and the United Kingdom on May 2nd, 2016.

The date is May 2nd, 2016, and it's a Monday. Anyone born today will have the star sign Taurus. The summer of 2016 has finally arrived. The weather has warmed up and the evenings are brighter than usual.

In America, the song Work by Rihanna featuring Drake is on top of the singles charts. Over in the UK, One Dance by Drake is the number one hit song. Barack Obama is currently the President of the United States, and the movie The Jungle Book is at the top of the Box Office.

The world is in shock following the sudden death of singer Prince. Following the 2016 Irish general election in February, an agreement has finally been reached for a Fine Gael-led minority government. In England, underdogs Leicester City have just been crowned as Premier League champions, despite being 5000-to-1 odds at the start of the season.

The mother of rap legend 2Pac, Afeni Shakur, has passed away after a suspected heart attack. If you were to travel back to this day, notable figures such as Muhammad Ali, Kimbo Slice, Christina Grimmie and Fidel Castro would all be still alive. On TV, people are watching popular shows such as "Game of Thrones", "Suits", "American Horror Story" and "Making a Murderer".

Meanwhile, gamers are playing titles such as "The Sims 4", "Batman: Arkham Knight", "Metal Gear Solid V: The Phantom Pain" and "Assassin's Creed Syndicate". Kids and teenagers are watching TV shows such as "Doc McStuffins", "Henry Danger", "Game Shakers" and "Bunnicula". Popular toys at the moment include the likes of the PlayStation 4, the Xbox One, Barbie Saddle n Ride and Star Wars BB-8 toy droid.

These are trending news stories and fads that were prevalent at this time. These are topics that would have been in the media on May 2nd, 2016.

Notable events that happened close to May 2nd, 2016.

Check out our personality summary for people who were born on May 2nd, 2016.

Wrestler. Deceased
Born on May 2nd, 1963
He was not alive on this date.

Barack Obama was the President of the United States on May 2nd, 2016.

David Cameron was the Prime Minister of the United Kingdom on May 2nd, 2016.

Enter your date of birth below to find out how old you were on May 2nd, 2016.
This information is not transmitted to our server.