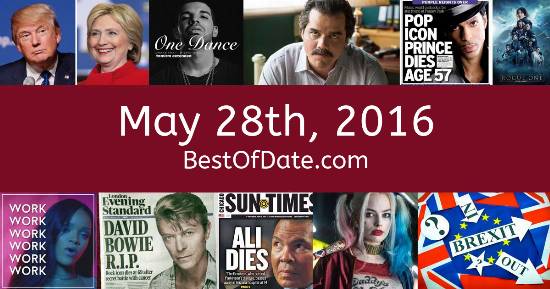 Songs that were on top of the music singles charts in the USA and the United Kingdom on May 28th, 2016.

The date is May 28th, 2016 and it's a Saturday. Anyone born today will have the star sign Gemini. Currently, people are enjoying their weekend.

The summer of 2016 has finally arrived. The weather has warmed up and the evenings are brighter than usual. In America, the song Can't Stop the Feeling! by Justin Timberlake is on top of the singles charts. Over in the UK, One Dance by Drake is the number one hit song.

Barack Obama is currently the President of the United States and the movie The Angry Birds Movie is at the top of the Box Office. In the United Kingdom, David Cameron is the current Prime Minister. It's 2016, so the music charts are being dominated by artists such as Drake, Lukas Graham, Sia, Mike Posner, The Chainsmokers and Calvin Harris.

Pawn Stars personality Chumlee has just pled guilty to a felony weapons charge and a gross misdemeanor of attempted drug possession. Model Amber Heard has just filed for divorce from actor Johnny Depp. In her court declaration, she states that Depp had been physically abusive towards her. Alisan Porter has won the tenth season of The Voice.

Donald Trump has just become the Republican nominee for the 2016 presidential election. Portuguese manager Jose Mourinho has just been named as the new coach of Manchester United. Spanish side Real Madrid have won the 2016 UEFA Champions League after defeating rivals Atletico Madrid on penalties.

The recent shooting of a gorilla called Harambe at Cincinnati Zoo has sparked global publicity and controversy. On TV, people are watching popular shows such as "Bones", "Homeland", "American Horror Story" and "Better Call Saul". Meanwhile, gamers are playing titles such as "Batman: Arkham Knight", "Overwatch", "Tom Clancy's The Division" and "Uncharted 4: A Thief's End".

Kids and teenagers are watching TV shows such as "Dora the Explorer", "Girl Meets World", "Henry Danger" and "Game Shakers". If you're a kid or a teenager, then you're probably playing with toys such as the PlayStation 4, the Xbox One and Star Wars BB-8 toy droid.

Notable events that occurred around May 28th, 2016.

Celebrities, historical figures and notable people who were born on the 28th of May.

Barack Obama was the President of the United States on May 28th, 2016.

David Cameron was the Prime Minister of the United Kingdom on May 28th, 2016.