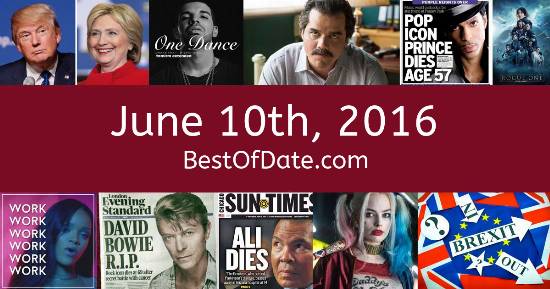 Songs that were on top of the music singles charts in the USA and the United Kingdom on June 10th, 2016.

The movie "Teenage Mutant Ninja Turtles: Out of the Shadows" was at the top of the box office on June 10th, 2016.

The date is June 10th, 2016 and it's a Friday. Anyone born today will have the star sign Gemini. Currently, people have "that Friday feeling" and are looking forward to the weekend.

It's summer, so the temperatures are warmer and the evenings are longer than usual. The song One Dance by Drake is on top of the singles charts in both the USA and the United Kingdom. Barack Obama is currently the President of the United States and the movie Teenage Mutant Ninja Turtles: Out of the Shadows is at the top of the Box Office.

In the United Kingdom, David Cameron is the current Prime Minister. It's 2016, so the music charts are being dominated by artists such as Drake, Lukas Graham, Sia, Mike Posner, The Chainsmokers and Calvin Harris. The recent shooting of a gorilla called Harambe at Cincinnati Zoo has sparked global publicity and controversy.

Tributes are currently pouring in for boxing legend Muhammad Ali, who has passed away at the age of 74. MMA fans are shocked by the sudden death of Kimbo Slice due to heart failure. Hillary Clinton has become a source of amusement after she tweets "Delete your account." at Donald Trump.

Gawker Media has just filed for bankruptcy after losing a legal battle with Hulk Hogan. The 2016 UEFA European Football Championship is taking place in France. On TV, people are watching popular shows such as "Bones", "The Walking Dead", "Game of Thrones" and "Orange Is the New Black".

Meanwhile, gamers are playing titles such as "Batman: Arkham Knight", "Rocket League", "Overwatch" and "Dark Souls III". Children and teenagers are currently watching television shows such as "Dora the Explorer", "Jake and the Never Land Pirates", "Doc McStuffins" and "Game Shakers". If you're a kid or a teenager, then you're probably playing with toys such as the PlayStation 4, the Xbox One, Star Wars BB-8 toy droid and L.O.L. Surprise!.

Barack Obama was the President of the United States on June 10th, 2016.

David Cameron was the Prime Minister of the United Kingdom on June 10th, 2016.