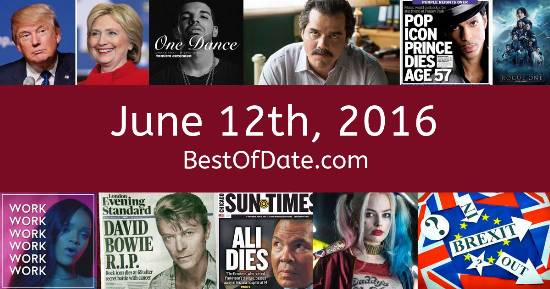 Songs that were on top of the music singles charts in the USA and the United Kingdom on June 12th, 2016.

The date is June 12th, 2016 and it's a Sunday. Anyone born today will have the star sign Gemini. Currently, people are enjoying their weekend.

It's summer, so the temperatures are warmer and the evenings are longer than usual. The song One Dance by Drake is on top of the singles charts in both the USA and the United Kingdom. Barack Obama is currently the President of the United States and the movie The Conjuring 2 is at the top of the Box Office.

In the United Kingdom, David Cameron is the current Prime Minister. It's 2016, so the music charts are being dominated by artists such as Drake, Lukas Graham, Sia, Mike Posner, The Chainsmokers and Calvin Harris. MMA fans are shocked by the sudden death of Kimbo Slice due to heart failure.

Hillary Clinton has become a source of amusement after she tweets "Delete your account." at Donald Trump. Gawker Media has just filed for bankruptcy after losing a legal battle with Hulk Hogan. The 2016 UEFA European Football Championship is taking place in France.

People are in shock following the murder of American singer and Youtube star Christina Grimmie in Orlando, Florida. America is in shock following a mass shooting inside Pulse, a gay nightclub in Orlando, Florida. The terrorist attack has left 49 people dead. The killing of a gorilla called Harambe back in May continues to be a topic of conversation. Harambe has achieved a cult-like status, as memes and over-the-top tributes continue to be made in his memory.

If you were to travel back to this day, notable figures such as Fidel Castro, Big Syke, George Michael and Carrie Fisher would all be still alive. On TV, people are watching popular shows such as "Prison Break", "Modern Family", "Homeland" and "Better Call Saul". Meanwhile, gamers are playing titles such as "Dying Light", "Halo 5: Guardians", "Tom Clancy's The Division" and "Doom".

Children and teenagers are currently watching television shows such as "Dora the Explorer", "Doc McStuffins", "Game Shakers" and "The Loud House". Popular toys at the moment include the likes of the PlayStation 4, the Xbox One, Barbie Saddle n Ride and Star Wars BB-8 toy droid.

TV personality. Deceased
Born on June 12th, 1980
She was not alive on this date.

Barack Obama was the President of the United States on June 12th, 2016.

David Cameron was the Prime Minister of the United Kingdom on June 12th, 2016.