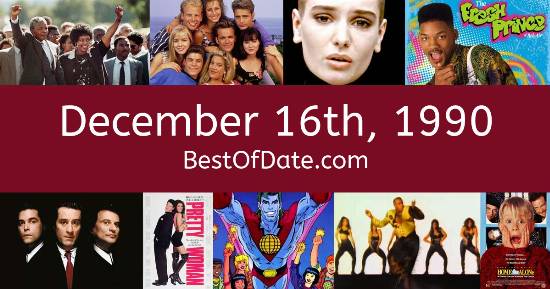 Songs that were on top of the music singles charts in the USA and the United Kingdom on December 16th, 1990:

The date is December 16th, 1990 and it's a Sunday. Anyone born today will have the star sign Sagittarius. Currently, people are enjoying their weekend.

The Christmas season of 1990 is in full swing. The decorations are up and festive songs are playing on the radio. In America, the song Because I Love You by Stevie B is on top of the singles charts. Over in the UK, Ice Ice Baby by Vanilla Ice is the number one hit song.

George W. Bush Snr. is currently the President of the United States and the movie Child's Play 2 is at the top of the Box Office. In the United Kingdom, John Major is the current Prime Minister. In fashion, many of the trends from the late 80s are still popular. Colored tights, denim overalls, leotards, flannel shirts and shoulder pads are all fashionable at the moment.

The fantasy romance film "Edward Scissorhands", starring Johnny Depp and Winona Ryder, is currently being shown in movie theaters. In Europe, the Soviet Union is continuing to dissolve. Recent demonstrations in Albania have forced the Communist government to announce a free national election. In celebrity news, British rock singer Rod Stewart and supermodel Rachel Hunter have been married in Beverly Hills.

Celebrities and historical figures that were born on the 16th of December:

Who was the Prime Minister of the United Kingdom on December 16th, 1990?

Enter your date of birth below to find out how old you were on December 16th, 1990.

Looking for some nostalgia? Here are some Youtube videos relating to December 16th, 1990. Please note that videos are automatically selected by Youtube and that results may vary! Click on the "Load Next Video" button to view the next video in the search playlist. In many cases, you'll find episodes of old TV shows, documentaries, music videos and soap dramas.

Here are some fun statistics about December 16th, 1990.