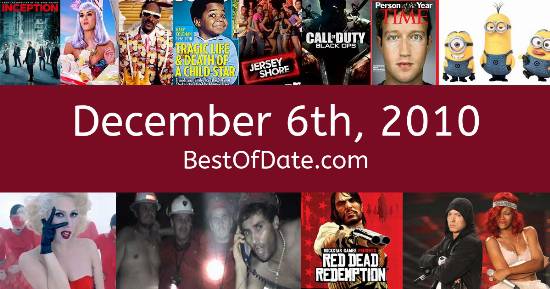 December 6th, 2010 relates to an event in a movie, book, game or television series:

Songs that were on top of the music singles charts in the USA and the United Kingdom on December 6th, 2010:

The date is December 6th, 2010 and it's a Monday. Anyone born today will have the star sign Sagittarius. The Christmas season of 2010 has just started.

In America, the song Only Girl by Rihanna is on top of the singles charts. Over in the UK, Heroes by X Factor Finalists 2010 is the number one hit song. Barack Obama is currently the President of the United States and the movie Tangled is at the top of the Box Office.

Pre-made comics called "Rage Comics" are extremely popular on the Internet at the moment, as people use them to share relatable experiences. Tributes are pouring in for actor Leslie Nielsen, who has passed away at the age of 84. Rob Ford has officially become the new mayor of Toronto.

Former X-Factor contestant Stacey Solomon has won the UK version of "I'm a Celebrity... Get Me Out of Here!". People are watching popular TV shows such as "Smallville", "Prison Break", "How I Met Your Mother" and "RuPaul's Drag Race". Meanwhile, gamers are playing titles such as "Farmville", "Battlefield: Bad Company 2", "Alan Wake" and "Civilization V".

Children and teenagers are currently watching television shows such as "Dora the Explorer", "Curious George", "Sonny with a Chance" and "Glee". If you're a kid or a teenager, then you're probably playing with toys such as "Xbox 360", "PlayStation 3", "ZhuZhu Pets" and "iPad".

Celebrities, historical figures and noteable people that were born on the 6th of December:

Who was the Prime Minister of the United Kingdom on December 6th, 2010?

Enter your date of birth below to find out how old you were on December 6th, 2010.

Looking for some nostalgia? Here are some Youtube videos relating to December 6th, 2010. Please note that videos are automatically selected by Youtube and that results may vary! Click on the "Load Next Video" button to view the next video in the search playlist. In many cases, you'll find episodes of old TV shows, documentaries, music videos and soap dramas.

Here are some fun statistics about December 6th, 2010.