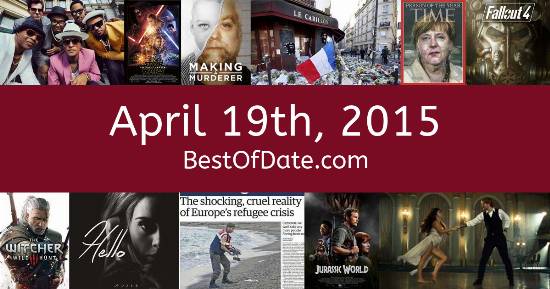 Songs that were on top of the music singles charts in the USA and the United Kingdom on April 19th, 2015:

The date is April 19th, 2015 and it's a Sunday. Anyone born today will have the star sign Aries. Currently, people are enjoying their weekend.

It's 2015, so the music charts are being dominated by the likes of OMI, Bruno Mars, Ellie Goulding, Adele, Justin Bieber and Hozier. The game Grand Theft Auto V has finally been released for the PC after several delays. People are watching popular TV shows such as "RuPaul's Drag Race", "Homeland", "Orange Is the New Black" and "Jane the Virgin".

Meanwhile, gamers are playing titles such as "Destiny", "Call of Duty: Advanced Warfare", "Battlefield Hardline" and "Mortal Kombat X". Children and teenagers are currently watching television shows such as "The Fairly OddParents", "Paw Patrol", "Girl Meets World" and "Henry Danger". Popular toys include the likes of "PlayStation 4" and "Xbox One".

Who was the Prime Minister of the United Kingdom on April 19th, 2015?

Enter your date of birth below to find out how old you were on April 19th, 2015.

Looking for some nostalgia? Here are some Youtube videos relating to April 19th, 2015. Please note that videos are automatically selected by Youtube and that results may vary! Click on the "Load Next Video" button to view the next video in the search playlist. In many cases, you'll find episodes of old TV shows, documentaries, music videos and soap dramas.