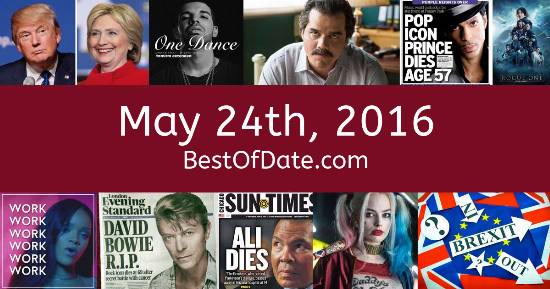 On May 24th, 2016, the following songs were at the top of the music charts in the USA and the UK.

The top "Box Office" movie on this date was the film "The Angry Birds Movie".

The date is May 24th, 2016, and it's a Tuesday. Anyone born today will have the star sign Gemini. The summer of 2016 has finally arrived. The weather has warmed up and the evenings are brighter than usual.

It's 2016, so the music charts are being dominated by artists such as Drake, Lukas Graham, Sia, Mike Posner, The Chainsmokers and Calvin Harris. Manchester United have just won the FA Cup after defeating Crystal Palace 2-1 in extra time. Pawn Stars personality Chumlee has just pled guilty to a felony weapons charge and a gross misdemeanor of attempted drug possession.

Model Amber Heard has just filed for divorce from actor Johnny Depp. In her court declaration, she states that Depp had been physically abusive towards her. Alisan Porter has won the tenth season of The Voice. If you were to travel back to this day, notable figures such as Muhammad Ali, Kimbo Slice, Christina Grimmie and Fidel Castro would all be still alive.

On TV, people are watching popular shows such as "Bones", "House of Cards", "Rick and Morty" and "Gotham". Meanwhile, gamers are playing titles such as "The Sims 4", "Cities: Skylines", "Rise of the Tomb Raider" and "Fallout 4". Children and teenagers are currently watching television shows such as "Agents of S.H.I.E.L.D.", "Girl Meets World", "Henry Danger" and "Nicky, Ricky, Dicky & Dawn".

These are trending news stories and fads that were prevalent at this time. These are topics that would have been in the media on May 24th, 2016.

Check out our personality summary for people who were born on May 24th, 2016.

Barack Obama was the President of the United States on May 24th, 2016.

David Cameron was the Prime Minister of the United Kingdom on May 24th, 2016.

Enter your date of birth below to find out how old you were on May 24th, 2016.
This information is not transmitted to our server.