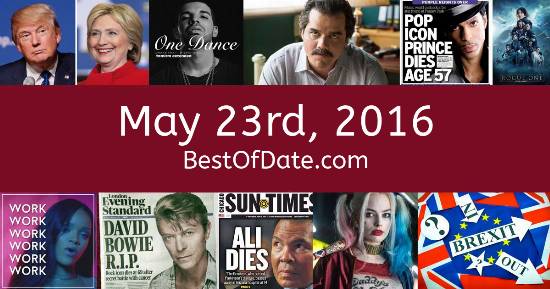 Songs that were on top of the music singles charts in the USA and the United Kingdom on May 23rd, 2016.

The date is May 23rd, 2016 and it's a Monday. Anyone born today will have the star sign Gemini. The summer of 2016 has finally arrived. The weather has warmed up and the evenings are brighter than usual.

It's 2016, so the music charts are being dominated by artists such as Drake, Lukas Graham, Sia, Mike Posner, The Chainsmokers and Calvin Harris. Manchester United have just won the FA Cup after defeating Crystal Palace 2-1 in extra time. Pawn Stars personality Chumlee has just pled guilty to a felony weapons charge and a gross misdemeanor of attempted drug possession.

Model Amber Heard has just filed for divorce from actor Johnny Depp. In her court declaration, she states that Depp had been physically abusive towards her. On TV, people are watching popular shows such as "Modern Family", "House of Cards", "Rick and Morty" and "Better Call Saul". Meanwhile, gamers are playing titles such as "Batman: Arkham Knight", "Rocket League", "Call of Duty: Black Ops III" and "Tom Clancy's The Division".

Kids and teenagers are watching TV shows such as "Jake and the Never Land Pirates", "Paw Patrol", "Nicky, Ricky, Dicky & Dawn" and "Bunnicula". Popular toys at the moment include the likes of the PlayStation 4, the Xbox One and Star Wars BB-8 toy droid.

Notable events that occurred around May 23rd, 2016.

Barack Obama was the President of the United States on May 23rd, 2016.

David Cameron was the Prime Minister of the United Kingdom on May 23rd, 2016.