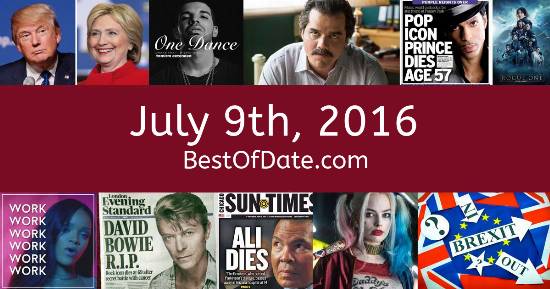 Songs that were on top of the music singles charts in the USA and the United Kingdom on July 9th, 2016:

The date is July 9th, 2016 and it's a Saturday. Anyone born today will have the star sign Cancer. Currently, people are enjoying their weekend.

The killing of a gorilla called Harambe back in May continues to be a topic of conversation. Harambe has achieved a cult-like status, as memes and over-the-top tributes continue to be made in his memory. The UK has just voted to leave the European Union and Prime Minister David Cameron has resigned. The British Pound has tumbled to historic lows in the aftermath of the Brexit vote. An augmented reality mobile game called Pokémon GO has recently been released. The game is rapidly rising in popularity.

On TV, people are watching popular shows such as "The Walking Dead", "Game of Thrones", "Homeland" and "Orange Is the New Black". Meanwhile, gamers are playing titles such as "Batman: Arkham Knight", "Overwatch", "Tom Clancy's The Division" and "Lego Star Wars: The Force Awakens". Children and teenagers are currently watching television shows such as "The Fairly OddParents", "Girl Meets World", "Henry Danger" and "Nicky, Ricky, Dicky & Dawn".

Celebrities, historical figures and noteable people who were born on the 9th of July:

Who was the Prime Minister of the United Kingdom on July 9th, 2016?

Enter your date of birth below to find out how old you were on July 9th, 2016.

Looking for some nostalgia? Here are some Youtube videos relating to July 9th, 2016. Please note that videos are automatically selected by Youtube and that results may vary! Click on the "Load Next Video" button to view the next video in the search playlist. In many cases, you'll find episodes of old TV shows, documentaries, music videos and soap dramas.

Here are some fun statistics about July 9th, 2016.