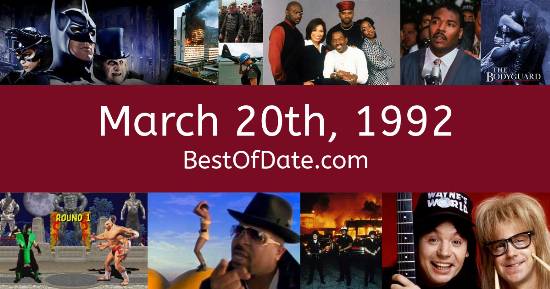 Songs that were on top of the music singles charts in the USA and the United Kingdom on March 20th, 1992:

The date is March 20th, 1992 and it's a Friday. Anyone born today will have the star sign Pisces. Currently, people have "that Friday feeling" and are looking forward to the weekend.

Spring has arrived and the days have become longer. St. Patrick's Day of 1992 has recently come and gone. In America, the song Save The Best For The Last by Vanessa Williams is on top of the singles charts.

Over in the UK, Stay by Shakespears Sisters is the number one hit song. George W. Bush Snr. is currently the President of the United States and the movie Basic Instinct is at the top of the Box Office. In the United Kingdom, John Major is the current Prime Minister.

In Australia and New Zealand, the 1992 Cricket World Cup is currently taking place. The trial of four police officers for the 1991 beating of Rodney King back is currently taking in Simi Valley, California. Following the recent collapse of the Soviet Union, President Boris Yeltsin has announced his government's intentions to create a new and separate Russian army.

Arkansas Governor Bill Clinton has become the presumptive nominee for the Democratic Party after winning the primary elections in Illinois and Michigan. It is now likely that Clinton will face off against Republican incumbent George H. W. Bush in this year's presidential election. In the United Kingdom, the campaign for the 1992 general election is underway. Prime Minister John Major and the Conservative Party are hoping to retain power. However, recent polls have been consistently favoring the Labour Party, who are being led by Neil Kinnock. On TV, people are watching popular shows such as "Only Fools and Horses", "Murder, She Wrote", "One Foot in the Grave" and "Home Improvement".

Meanwhile, gamers are playing titles such as "Duck Hunt", "The Legend of Zelda: A Link to the Past", "Super Castlevania IV" and "Desert Strike ". Kids and teenagers are watching TV shows such as "Pingu", "Adventures of the Little Koala", "Count Duckula" and "The Fresh Prince of Bel-Air". If you're a kid or a teenager, then you're probably playing with toys such as "Easy-Bake Oven", "Transformers", "Polly Pocket" and "Pogs".

Who was the Prime Minister of the United Kingdom on March 20th, 1992?

Enter your date of birth below to find out how old you were on March 20th, 1992.

Looking for some nostalgia? Here are some Youtube videos relating to March 20th, 1992. Please note that videos are automatically selected by Youtube and that results may vary! Click on the "Load Next Video" button to view the next video in the search playlist. In many cases, you'll find episodes of old TV shows, documentaries, music videos and soap dramas.