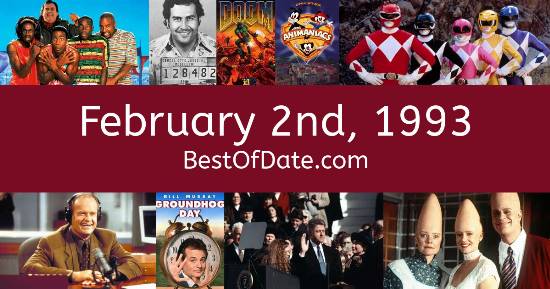 February 2nd, 1993 relates to an event in a movie, book, game or television series:

Songs that were on top of the music singles charts in the USA and the United Kingdom on February 2nd, 1993:

The date is February 2nd, 1993 and it's a Tuesday. Anyone born today will have the star sign Aquarius. The song I Will Always Love You by Whitney Houston is on top of the singles charts in both the USA and the United Kingdom.

Bill Clinton is currently the President of the United States and the movie Aladdin is at the top of the Box Office. In the United Kingdom, John Major is the current Prime Minister. A civil war is currently taking place in the African country of Rwanda.

In fashion, many of the trends from the late 80s are still in vogue. Colored tights, denim overalls, leotards, flannel shirts and shoulder pads are all fashionable at the moment. Grunge fashion has also become mainstream, popularizing band t-shirts, ripped jeans, mom jeans and Doc Martens. In Europe, a war is continuing to rage on in Bosnia and Herzegovina. A playing discs game called "Pogs" is currently spreading in popularity throughout the world.

It's 1993, so radio stations are being dominated by the likes of Meat Loaf, UB40, Snow, Haddaway, Whitney Houston, Take That, Janet Jackson and Mariah Carey. Wrestling fans are mourning the death of Andre the Giant, who recently passed away from congested heart failure at the age of 46. The Dallas Cowboys have just won Super Bowl XXVII after beating the Buffalo Bills by 52-17 at the Rose Bowl in Pasadena, California. This is the third year in a row that the Buffalo Bills have lost the Super Bowl. Pop star Michael Jackson performed at the halftime show.

On TV, people are watching popular shows such as "Matlock", "Full House", "Seinfeld" and "X-Men". Meanwhile, gamers are playing titles such as "Wolfenstein 3D", "Ecco the Dolphin", "Super Mario Kart" and "Sonic the Hedgehog 2". Children and teenagers are currently watching television shows such as "Adventures of the Little Koala", "Fireman Sam", "The Wonder Years" and "Beverly Hills, 90210".

Celebrities, historical figures and noteable people who were born on the 2nd of February:

Who was the Prime Minister of the United Kingdom on February 2nd, 1993?

Enter your date of birth below to find out how old you were on February 2nd, 1993.

Looking for some nostalgia? Here are some Youtube videos relating to February 2nd, 1993. Please note that videos are automatically selected by Youtube and that results may vary! Click on the "Load Next Video" button to view the next video in the search playlist. In many cases, you'll find episodes of old TV shows, documentaries, music videos and soap dramas.

Here are some fun statistics about February 2nd, 1993.