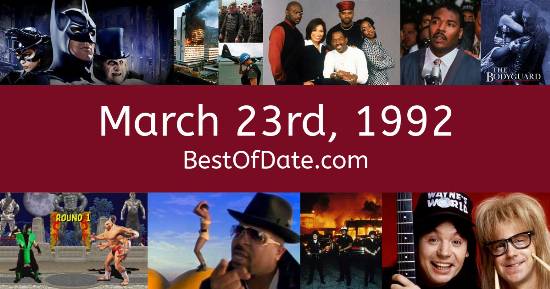 On March 23rd, 1992, the following songs were at the top of the music charts in the USA and the UK.

The date is March 23rd, 1992, and it's a Monday. Anyone born today will have the star sign Aries. Spring has arrived and the days have become longer.

The trial of four police officers for the 1991 beating of Rodney King back is currently taking in Simi Valley, California. Arkansas Governor Bill Clinton has become the presumptive nominee for the Democratic Party after winning the primary elections in Illinois and Michigan. It is now likely that Clinton will face off against Republican incumbent George H. W. Bush in this year's presidential election. In the United Kingdom, the campaign for the 1992 general election is underway. Prime Minister John Major and the Conservative Party are hoping to retain power. However, recent polls have been consistently favoring the Labour Party, who are being led by Neil Kinnock.

If you were to travel back to this day, notable figures such as Robert Reed, Anthony Perkins, Audrey Hepburn and Thurgood Marshall would all be still alive. On TV, people are watching popular shows such as "Last of the Summer Wine", "Matlock", "One Foot in the Grave" and "Step by Step". Meanwhile, gamers are playing titles such as "Duck Hunt", "Battletoads", "Streets of Rage" and "Desert Strike ".

Children and teenagers are currently watching television shows such as "Married... with Children", "Fireman Sam", "Garfield and Friends" and "Darkwing Duck". Popular toys at the moment include the likes of Mr Frosty, the Game Boy, Super Soaker (water gun) and Pogs / Milkcaps.

These are trending news stories and fads that were prevalent at this time. These are topics that would have been in the media on March 23rd, 1992.

News stories and other events that happened around March 23rd, 1992.

Check out our personality summary for people who were born on March 23rd, 1992.

If you are looking for some childhood nostalgia, then you should check out March 23rd, 1998 instead.

Love Island winner.
Born on March 23rd, 1995
He was born exactly 3 years after this date.

John Major was the Prime Minister of the United Kingdom on March 23rd, 1992.

Find out what your age was on March 23rd, 1992, by entering your DOB below.
This information is not saved on our server.