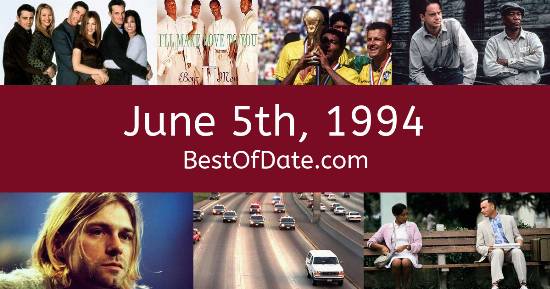 Songs that were on top of the music singles charts in the USA and the United Kingdom on June 5th, 1994.

The date is June 5th, 1994, and it's a Sunday. Anyone born today will have the star sign Gemini. Currently, people are enjoying their weekend.

It's summer, so the temperatures are warmer and the evenings are longer than usual. In America, the song I Swear by All-4-One is on top of the singles charts. Over in the UK, Come On You Reds by Manchester United FC & Status Quo is the number one hit song.

Bill Clinton is currently the President of the United States, and the movie The Flintstones is at the top of the Box Office. In the United Kingdom, John Major is the current Prime Minister. Meanwhile, in technology news, a relatively new storage format called the CD is beginning to outpace the regular cassette tape in music sales. The disc-based format gives listeners the ability to skip between songs instead of having to manually rewind and forward.

If you were to travel back to this day, notable figures such as Nicole Brown Simpson, Andrés Escobar, Raul Julia and Richey Edwards would all be still alive. On TV, people are watching popular shows such as "Only Fools and Horses", "Seinfeld", "Mad About You" and "The Nanny". Meanwhile, gamers are playing titles such as "Mortal Kombat", "Tiny Toon Adventures 2: Trouble in Wackyland", "Myst" and "Mega Man 6".

Children and teenagers are currently watching television shows such as "Teenage Mutant Ninja Turtles", "Round the Twist", "Blossom" and "Living Single". If you're a kid or a teenager, then you're probably playing with toys such as Pogo ball / Lolo ball, Micro Machines, G.I. Joe (figures) and Pogs / Milkcaps.

These are trending news stories and fads that were prevalent at this time. These are topics that would have been in the media on June 5th, 1994.

News stories, pop culture trends, and other events that happened around June 5th, 1994.

Check out our personality summary for people who were born on June 5th, 1994.

Television shows that people were watching in June, 1994.

Popular video games that people were playing in June of 1994.

If you are looking for some childhood nostalgia, then you should check out June 5th, 2000, instead.

Celebrities, historical figures, and other notable people who were born on June 5th.

Bill Clinton was the President of the United States on June 5th, 1994.

Find out what your age was on June 5th, 1994, by entering your DOB below.
This information is not saved on our server.

Here are some fun statistics about June 5th, 1994.