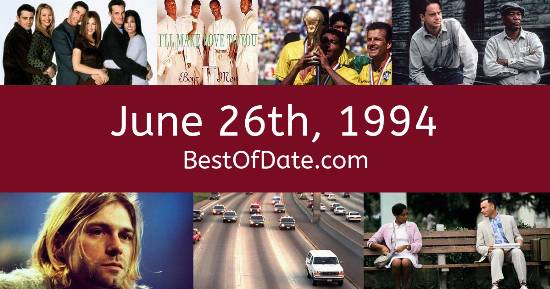 Songs that were on top of the music singles charts in the USA and the United Kingdom on June 26th, 1994.

The date is June 26th, 1994 and it's a Sunday. Anyone born today will have the star sign Cancer. Currently, people are enjoying their weekend.

Bill Clinton is currently the President of the United States and the movie Wolf is at the top of the Box Office. In the United Kingdom, John Major is the current Prime Minister. In fashion, "grunge" clothing has declined in popularity and women are beginning to wear form-fitting outfits such as slip dresses and pencil skirts. Movies such as Clueless and The Craft have popularized the "sexy school girl" look.

In the United States, the 1994 FIFA World Cup is being held. In basketball, the Houston Rockets have won the 1994 NBA Finals after defeating the New York Knicks 4-3. Former NFL star O.J. Simpson has pleaded "Not Guilty" to the murders of Nicole Brown Simpson and Ronald Goldman. Simpson was arrested earlier this month for the murders after he led police in Los Angeles on a highly-televised chase in his white Ford Bronco.

A new animated film called "The Lion King" has just been released in movie theaters. In Germany, the final Russian troops have left the country. This marks a final end to Russian occupation after nearly 50 years. On TV, people are watching popular shows such as "Married... with Children", "Seinfeld", "Melrose Place" and "Martin".

Meanwhile, gamers are playing titles such as "Gunstar Heroes", "Disney's Aladdin", "Doom" and "Super Metroid". Kids and teenagers are watching TV shows such as "Dinosaurs", "Taz-Mania", "Living Single" and "Animaniacs". Popular toys at the moment include the likes of the Easy-Bake Oven, G.I. Joe (figures), Nerf Blaster and Mighty Max.

Bill Clinton was the President of the United States on June 26th, 1994.

John Major was the Prime Minister of the United Kingdom on June 26th, 1994.

Leave a comment and tell everyone why June 26th, 1994 is important to you.