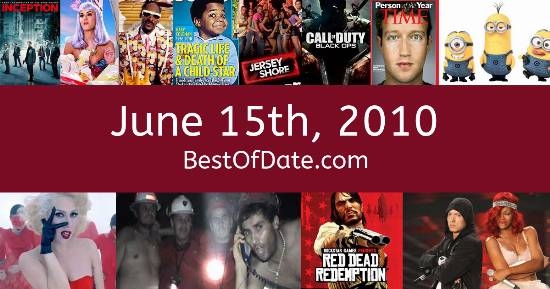 Songs that were on top of the music singles charts in the USA and the United Kingdom on June 15th, 2010.

The date is June 15th, 2010 and it's a Tuesday. Anyone born today will have the star sign Gemini. It's summer, so the temperatures are warmer and the evenings are longer than usual.

It's 2010, so the music charts are being dominated by artists such as Kesha, Katy Perry, Rihanna, Eminem and Bruno Mars. In South Africa, the 2010 FIFA World Cup is currently taking place and stadiums are being filled with the sound of vuvuzelas. Celebrity gossip blogger Perez Hilton has come under fire after posting an upskirt picture of 17-year-old Miley Cyrus on Twitter.

Kids and teenagers are watching TV shows such as "Mickey Mouse Clubhouse", "The Hills", "iCarly" and "The Suite Life on Deck". Popular toys at the moment include the likes of the Xbox 360, the PlayStation 3, ZhuZhu Pets and the iPad.

If you are looking for some childhood nostalgia, then check out June 15th, 2016 instead.

Barack Obama was the President of the United States on June 15th, 2010.

David Cameron was the Prime Minister of the United Kingdom on June 15th, 2010.