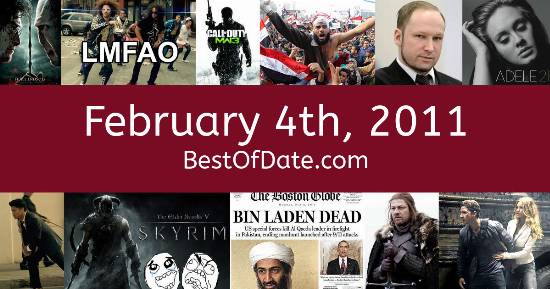 Songs that were on top of the music singles charts in the USA and the United Kingdom on February 4th, 2011:

The date is February 4th, 2011 and it's a Friday. Anyone born today will have the star sign Aquarius. Currently, people have "that Friday feeling" and are looking forward to the weekend.

In America, the song Hold It Against Me by Britney Spears is on top of the singles charts. Over in the UK, We R Who We R by Kesha is the number one hit song. Barack Obama is currently the President of the United States and the movie The Roommate is at the top of the Box Office.

A wave of demonstrations and protests have been taking place across the Middle East, in what has become known as the "Arab Spring". It's 2011, so the music charts are being dominated by artists such as Adele, LMFAO, Katy Perry and Bruno Mars. In soccer, Fernando Torres has transferred to Chelsea in a £50 million deal. Meanwhile, Liverpool have replaced Torres by purchasing Andy Carroll from Newcastle for £35. They have also secured the signing of Ajax striker Luis Suarez.

Protesters in Egypt are continuing to take to the streets in defiance of president Hosni Mubarak. On TV, people are watching popular shows such as "Two and a Half Men", "House", "Bones" and "Sons of Anarchy". Meanwhile, gamers are playing titles such as "Heavy Rain", "Halo: Reach", "Fallout: New Vegas" and "Call of Duty: Black Ops".

Kids and teenagers are watching TV shows such as "The Fairly OddParents", "iCarly", "Glee" and "Good Luck Charlie". Popular toys include the likes of "Xbox 360", "PlayStation 3" and "iPad".

Who was the Prime Minister of the United Kingdom on February 4th, 2011?

Enter your date of birth below to find out how old you were on February 4th, 2011.

Looking for some nostalgia? Here are some Youtube videos relating to February 4th, 2011. Please note that videos are automatically selected by Youtube and that results may vary! Click on the "Load Next Video" button to view the next video in the search playlist. In many cases, you'll find episodes of old TV shows, documentaries, music videos and soap dramas.

Here are some fun statistics about February 4th, 2011.