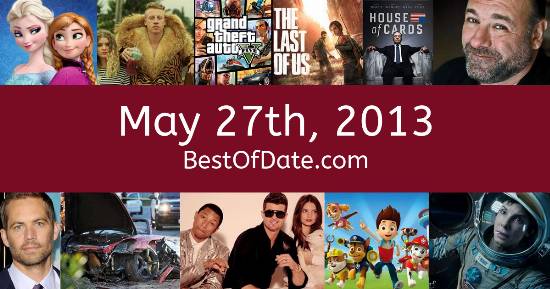 Songs that were on top of the music singles charts in the USA and the United Kingdom on May 27th, 2013:

The date is May 27th, 2013 and it's a Monday. Anyone born today will have the star sign Gemini. The summer of 2013 has finally arrived. The weather has warmed up and the evenings are brighter than usual.

In America, the song Can't Hold Us by Macklemore & Ryan Lewis is on top of the singles charts. Over in the UK, Blurred Lines by Robin Thicke is the number one hit song. Barack Obama is currently the President of the United States and the movie Star Trek Into Darkness is at the top of the Box Office.

In the United Kingdom, David Cameron is the current Prime Minister. It's 2013, so the music charts are being dominated by artists such as Macklemore, Robin Thicke, Imagine Dragons and Bruno Mars. The UK is currently mourning the death of British soldier Lee Rigby, who was murdered by two Islamic terrorists in Woolwich, London.

Bayern Munich have just won the 2013 UEFA Champions League Final after a late goal from Arjen Robben helps to secure them a 1-0 victory over Borussia Dortmund. People are watching popular TV shows such as "How I Met Your Mother", "Breaking Bad", "RuPaul's Drag Race" and "Homeland". Meanwhile, gamers are playing titles such as "Call of Duty: Black Ops II", "Dead Space 3", "Aliens: Colonial Marines" and "Tomb Raider".

Kids and teenagers are watching TV shows such as "The Fairly OddParents", "LazyTown", "Good Luck Charlie" and "Jake and the Never Land Pirates". If you're a kid or a teenager, then you're probably playing with toys such as "Xbox 360", "PlayStation 3" and "The Wii U".

Notable events that occurred around May 27th, 2013:

Celebrities and historical figures that were born on the 27th of May:

National holidays and famous events that fall on the 27th of May:

Who was the Prime Minister of the United Kingdom on May 27th, 2013?

Looking for some nostalgia? Here are some Youtube videos relating to May 27th, 2013. Please note that videos are automatically selected by Youtube and that results may vary! Click on the "Load Next Video" button to view the next video in the search playlist. In many cases, you'll find episodes of old TV shows, documentaries, music videos and soap dramas.