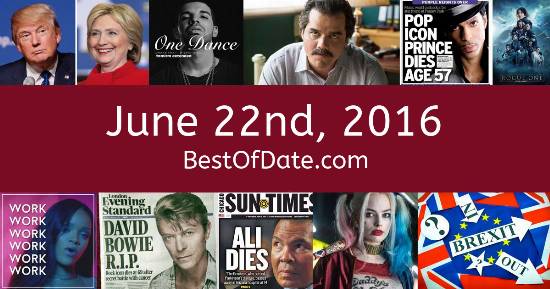 These songs were on top of the music charts in the United States and the United Kingdom on June 22nd, 2016.

The top "Box Office" movie on this date was the film "Finding Dory".

The date is June 22nd, 2016, and it's a Wednesday. Anyone born today will have the star sign Cancer. It's summer, so the temperatures are warmer and the evenings are longer than usual.

It's 2016, so the music charts are being dominated by artists such as Drake, Lukas Graham, Sia, Mike Posner, The Chainsmokers and Calvin Harris. The 2016 UEFA European Football Championship is taking place in France. America is in shock following a mass shooting inside Pulse, a gay nightclub in Orlando, Florida. The terrorist attack has left 49 people dead.

The killing of a gorilla called Harambe back in May continues to be a topic of conversation. Harambe has achieved a cult-like status, as memes and over-the-top tributes continue to be made in his memory. The Cleveland sports curse has finally come to and end, as the Cleveland Cavaliers win the 2016 NBA Finals by defeating the Golden State Warriors. If you were to travel back to this day, notable figures such as Fidel Castro, Big Syke, George Michael and Carrie Fisher would all be still alive.

On TV, people are watching popular shows such as "Prison Break", "Modern Family", "The Walking Dead" and "Making a Murderer". Meanwhile, gamers are playing titles such as "The Sims 4", "Dying Light", "Lego Jurassic World" and "Assassin's Creed Syndicate". Children and teenagers are currently watching television shows such as "The Fairly OddParents", "Mickey Mouse Clubhouse", "The Thundermans" and "Game Shakers".

If you're a kid or a teenager, then you're probably playing with toys such as the PlayStation 4, Barbie Saddle n Ride, Star Wars BB-8 toy droid and L.O.L. Surprise!.

These are trending news stories and fads that were prevalent at this time. These are topics that would have been in the media on June 22nd, 2016.

Check out our personality summary for people who were born on June 22nd, 2016.

If you were born on this date, then it is unlikely that you will remember anything from the year 2016.

If you are looking for some childhood nostalgia, then you should check out June 22nd, 2022, instead.

Celebrities, historical figures, and other notable people who were born on June 22nd.

Barack Obama was the President of the United States on June 22nd, 2016.

Enter your date of birth below to find out how old you were on June 22nd, 2016.
This information is not transmitted to our server.