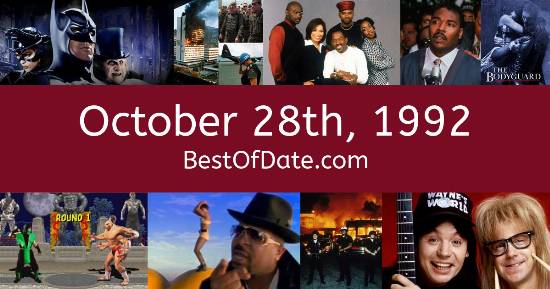 Songs that were on top of the music singles charts in the USA and the United Kingdom on October 28th, 1992.

The date is October 28th, 1992 and it's a Wednesday. Anyone born today will have the star sign Scorpio. The summer is long gone. Temperatures have started to become much cooler and the evenings are beginning to get darker.

Fallen leaves have carpeted driveways, lawns, pathways and sidewalks and there's a fresh earthy scent in the ear. Halloween of 1992 is just days away. People are watching horror movies and thinking about which costume they are going to wear. Others are organizing parties. The song End Of The Road by Boyz II Men is on top of the singles charts in both the USA and the United Kingdom.

George W. Bush Snr. is currently the President of the United States and the movie The Last of the Mohicans is at the top of the Box Office. In the United Kingdom, John Major is the current Prime Minister. Texting is not a thing yet. Instead, people are using landline phones and pagers. Furthermore, the vast majority of people still have no idea what "the Internet" is.

In Europe, a war is continuing to rage on in Bosnia and Herzegovina. In the United States, the campaign for the 1992 presidential election is in full swing, with Democratic Party nominee Bill Clinton taking on Republican incumbent George H. W. Bush. A new horror movie called "Candyman" has just been released in movie theaters. Meanwhile, Quentin Tarantino's movie "Reservoir Dogs" has also hit the big screen.

In baseball, the Toronto Blue Jays have just won the 1992 World Series after defeating the Atlanta Braves by four games to two. This is the first time that a baseball team outside of the United States has won the World Series. If you were to travel back to this day, notable figures such as Audrey Hepburn, Thurgood Marshall, Andre the Giant and Bobby Moore would all be still alive. On TV, people are watching popular shows such as "Sherlock Holmes", "Quantum Leap", "Family Matters" and "Martin".

Meanwhile, gamers are playing titles such as "Paperboy", "Road Rash II", "Kirby's Dream Land" and "Evander Holyfield's Real Deal Boxing". Children and teenagers are currently watching television shows such as "Married... with Children", "Chip 'n' Dale's Rescue Rangers", "Round the Twist" and "Are You Afraid of the Dark?". If you're a kid or a teenager, then you're probably playing with toys such as Sylvanian Families, the Game Boy, G.I. Joe (figures) and Littlest Pet Shop.

If you are looking for some childhood nostalgia, then check out October 28th, 1998 instead.

Rugby player.
Born on October 28th, 1993
He was born exactly one year after this date.

Rugby player.
Born on October 28th, 1994
He was born exactly 2 years after this date.

George W. Bush Snr. was the President of the United States on October 28th, 1992.

John Major was the Prime Minister of the United Kingdom on October 28th, 1992.

Enter your date of birth below to find out how old you were on October 28th, 1992.

Here are some fun statistics about October 28th, 1992.