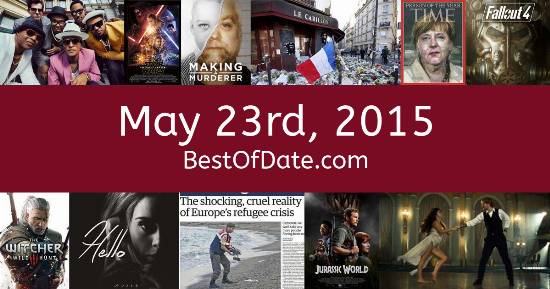 Songs that were on top of the music singles charts in the USA and the United Kingdom on May 23rd, 2015:

The date is May 23rd, 2015 and it's a Saturday. Anyone born today will have the star sign Gemini. Currently, people are enjoying their weekend.

Barack Obama is currently the President of the United States and the movie Pitch Perfect 2 is at the top of the Box Office. In the United Kingdom, David Cameron is the current Prime Minister. A social networking website called Vine is extremely popular at the moment.

It's 2015, so the music charts are being dominated by the likes of OMI, Bruno Mars, Ellie Goulding, Adele, Justin Bieber and Hozier. Nick Fradiani has just won the 14th season of American Idol and a new VoIP application called "Discord" has recently been released. The eight season of The Voice has come to an end, with Sawyer Fredericks being crowned as the winner.

The reality TV show "19 Kids and Counting" has just been cancelled. The cancellation comes in the wake of recent reports that one of the show's main stars, Josh Duggar, molested underage girls when he was younger. In Ireland, people are currently voting on whether to legalize same-sex marraige. On TV, people are watching popular shows such as "The Vampire Diaries", "Suits", "Homeland" and "Orange Is the New Black".

Meanwhile, gamers are playing titles such as "Watchdogs", "Battlefield Hardline", "Mortal Kombat X" and "The Witcher 3: Wild Hunt". Kids and teenagers are watching TV shows such as "Jessie", "Lab Rats: Bionic Island", "Every Witch Way" and "Girl Meets World". Popular toys include the likes of "PlayStation 4" and "Xbox One".

Notable events that occurred around May 23rd, 2015:

Who was the Prime Minister of the United Kingdom on May 23rd, 2015?

Looking for some nostalgia? Here are some Youtube videos relating to May 23rd, 2015. Please note that videos are automatically selected by Youtube and that results may vary! Click on the "Load Next Video" button to view the next video in the search playlist. In many cases, you'll find episodes of old TV shows, documentaries, music videos and soap dramas.