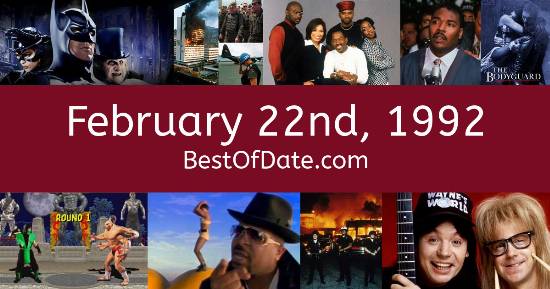 Songs that were on top of the music singles charts in the USA and the United Kingdom on February 22nd, 1992.

The date is February 22nd, 1992 and it's a Saturday. Anyone born today will have the star sign Pisces. Currently, people are enjoying their weekend.

It's 1992, so radio stations are being dominated by the likes of Kris Kross, Boyz II Men, Whitney Houston, Sir Mix-a-Lot, Right Said Fred, Snap! and Nirvana. In France, the 1992 Winter Olympics are currently taking place in Albertville. Boxer Mike Tyson has recently been found guilty of the rape of 18-year-old Desiree Washington in Indiana. He is currently awaiting sentencing.

The trial of four police officers for the 1991 beating of Rodney King back is currently taking in Simi Valley, California. The comedy film "Wayne's World", starring Mike Myers, is currently showing in movie theaters. In Milwaukee, serial killer Jeffrey Dahmer has just been found guilty and sentenced to life in prison.

In music, Mötley Crüe lead singer Vince Neil has recently left the band to focus on a career in race car driving. The UN Security Council has approved plans to send a UN peacekeeping force into Yugoslavia. In Australia and New Zealand, the 1992 Cricket World Cup is currently taking place.

On TV, people are watching popular shows such as "Knots Landing", "Teenage Mutant Ninja Turtles", "The Fresh Prince of Bel-Air" and "Beverly Hills, 90210". Meanwhile, gamers are playing titles such as "Battletoads", "Sonic the Hedgehog", "The Legend of Zelda: A Link to the Past" and "Civilization". Children and teenagers are currently watching television shows such as "Danger Mouse", "Teenage Mutant Ninja Turtles", "The Wonder Years" and "The Adventures of Pete & Pete".

If you're a kid or a teenager, then you're probably playing with toys such as the Easy-Bake Oven, Micro Machines, Jenga and Yo-yo.

A Spotify playlist of songs from the year 1992. Take a trip back to the days of Whitney Houston, the Red Hot Chili Peppers, Boyz II Men and SNAP!

George W. Bush Snr. was the President of the United States on February 22nd, 1992.

John Major was the Prime Minister of the United Kingdom on February 22nd, 1992.

Enter your date of birth below to find out how old you were on February 22nd, 1992.

Here are some fun statistics about February 22nd, 1992.

Leave a comment and tell everyone why February 22nd, 1992 is important to you.