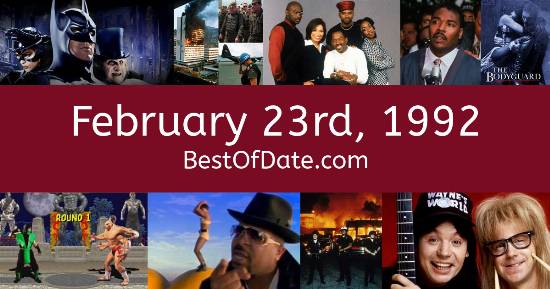 Songs that were on top of the music singles charts in the USA and the United Kingdom on February 23rd, 1992:

The date is February 23rd, 1992 and it's a Sunday. Anyone born today will have the star sign Pisces. Currently, people are enjoying their weekend.

It's 1992, so radio stations are being dominated by the likes of Kris Kross, Boyz II Men, Whitney Houston, Sir Mix-a-Lot, Right Said Fred, Snap! and Nirvana. In France, the 1992 Winter Olympics are currently taking place in Albertville. The trial of four police officers for the 1991 beating of Rodney King back is currently taking in Simi Valley, California.

In Australia and New Zealand, the 1992 Cricket World Cup is currently taking place. On TV, people are watching popular shows such as "Cheers", "Roseanne", "Saved by the Bell" and "Family Matters". Meanwhile, gamers are playing titles such as "Duck Hunt", "Sonic the Hedgehog", "Streets of Rage" and "F-16 Combat Pilot".

Kids and teenagers are watching TV shows such as "Garfield and Friends", "The Simpsons", "Rosie and Jim" and "The Adventures of Pete & Pete". If you're a kid or a teenager, then you're probably playing with toys such as "Transformers", "Micro Machines", "The Super Nintendo Entertainment System (SNES)" and "Super Soaker (water gun)".

Who was the Prime Minister of the United Kingdom on February 23rd, 1992?

Enter your date of birth below to find out how old you were on February 23rd, 1992.

Looking for some nostalgia? Here are some Youtube videos relating to February 23rd, 1992. Please note that videos are automatically selected by Youtube and that results may vary! Click on the "Load Next Video" button to view the next video in the search playlist. In many cases, you'll find episodes of old TV shows, documentaries, music videos and soap dramas.

Here are some fun statistics about February 23rd, 1992.