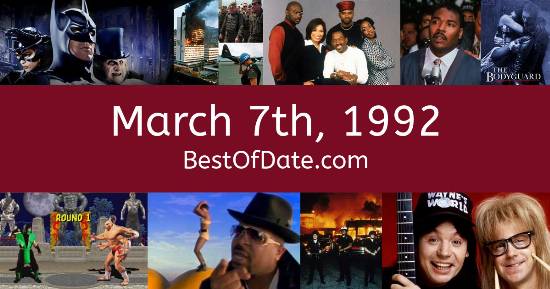 March 7th, 1992 relates to a fictional event in a movie, book, game or television series.

Songs that were on top of the music singles charts in the USA and the United Kingdom on March 7th, 1992.

The date is March 7th, 1992 and it's a Saturday. Anyone born today will have the star sign Pisces. Currently, people are enjoying their weekend.

A new sci-fi film called "The Lawnmower Man" has just been released in movie theaters. On TV, people are watching popular shows such as "Magnum, P.I.", "Cheers", "Married... with Children" and "Roseanne". Meanwhile, gamers are playing titles such as "Battletoads", "Sonic the Hedgehog", "Civilization" and "Desert Strike ".

Kids and teenagers are watching TV shows such as "Full House", "Fireman Sam", "The Adventures of Pete & Pete" and "Doug". Popular toys at the moment include the likes of Jenga, Polly Pocket, G.I. Joe (figures) and Super Soaker (water gun).

George W. Bush Snr. was the President of the United States on March 7th, 1992.

John Major was the Prime Minister of the United Kingdom on March 7th, 1992.

Enter your date of birth below to find out how old you were on March 7th, 1992.

Here are some fun statistics about March 7th, 1992.

Leave a comment and tell everyone why March 7th, 1992 is important to you.