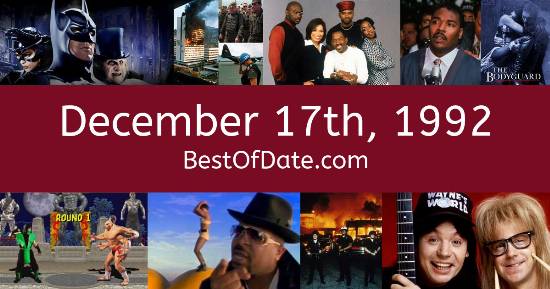 Songs that were on top of the music singles charts in the USA and the United Kingdom on December 17th, 1992.

The date is December 17th, 1992 and it's a Thursday. Anyone born today will have the star sign Sagittarius. The Christmas season of 1992 is in full swing. The decorations are up and festive songs are playing on the radio.

In Europe, a war is continuing to rage on in Bosnia and Herzegovina. It has been officially announced that Prince Charles and Lady Diana have separated. The news has not come as a shock, as it is public knowledge that their relationship had fallen apart and that they were both seeing other people. The legal drama film "A Few Good Men", starring Tom Cruise and Jack Nicholson, has just been released in movie theaters. Meanwhile, "The Muppet Christmas Carol" has also hit the big screen.

Former N.W.A rapper Dr. Dre has just released his debut solo album "The Chronic". The album contains songs such as "Nuthin' but a 'G' Thang". On TV, people are watching popular shows such as "The Wonder Years", "Rugrats", "Batman: The Animated Series" and "Mad About You". Meanwhile, gamers are playing titles such as "Super Castlevania IV", "Desert Strike ", "Wolfenstein 3D" and "Ecco the Dolphin".

Kids and teenagers are watching TV shows such as "Pingu", "Saved by the Bell", "Home Improvement" and "Barney & Friends". Popular toys at the moment include the likes of Micro Machines, Polly Pocket, Nerf Blaster and Littlest Pet Shop.

George W. Bush Snr. was the President of the United States on December 17th, 1992.

John Major was the Prime Minister of the United Kingdom on December 17th, 1992.

Enter your date of birth below to find out how old you were on December 17th, 1992.

Here are some fun statistics about December 17th, 1992.

Leave a comment and tell everyone why December 17th, 1992 is important to you.