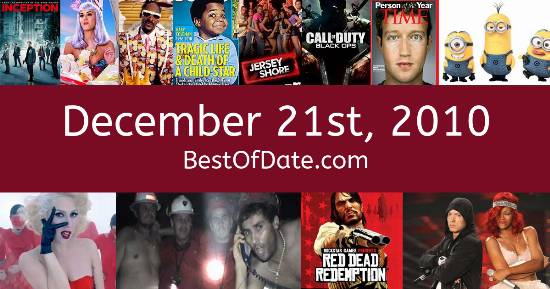 Songs that were on top of the music singles charts in the USA and the United Kingdom on December 21st, 2010:

The date is December 21st, 2010 and it's a Tuesday. Anyone born today will have the star sign Sagittarius. Christmas Day of 2010 is fast approaching and the excitement is building. Department stores are thronged with Christmas shoppers.

Pre-made comics called "Rage Comics" are extremely popular on the Internet at the moment, as people use them to share relatable experiences. Matt Cardle has been crowned as the winner of seventh season of The X Factor. Meanwhile, wrestling star Hulk Hogan has recently tied the knot with his second wife Jennifer McDaniel.

People on the Internet are using the phrase "That Really Rustled My Jimmies" to express their annoyance at things. Anti-government street demonstrations are taking place in Tunisia following the the self-immolation of a man called Mohamed Bouazizi. The protests have been caused by high unemployment and the cost of food. People are watching popular TV shows such as "CSI: NY", "House", "Bones" and "RuPaul's Drag Race".

Meanwhile, gamers are playing titles such as "Mafia Wars", "Battlefield: Bad Company 2", "Fallout: New Vegas" and "Assassin's Creed: Brotherhood". Kids and teenagers are watching TV shows such as "The Fairly OddParents", "Ben 10", "Mickey Mouse Clubhouse" and "Curious George". If you're a kid or a teenager, then you're probably playing with toys such as "Xbox 360", "PlayStation 3", "ZhuZhu Pets" and "iPad".

Who was the Prime Minister of the United Kingdom on December 21st, 2010?

Enter your date of birth below to find out how old you were on December 21st, 2010.

Looking for some nostalgia? Here are some Youtube videos relating to December 21st, 2010. Please note that videos are automatically selected by Youtube and that results may vary! Click on the "Load Next Video" button to view the next video in the search playlist. In many cases, you'll find episodes of old TV shows, documentaries, music videos and soap dramas.

Here are some fun statistics about December 21st, 2010.