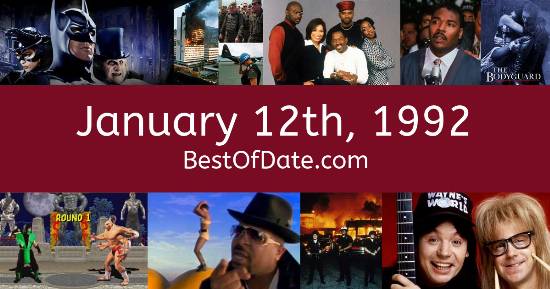 January 12th, 1992 relates to a fictional event in a movie, book, game or television series.

Songs that were on top of the music singles charts in the USA and the United Kingdom on January 12th, 1992.

The date is January 12th, 1992 and it's a Sunday. Anyone born today will have the star sign Capricorn. Currently, people are enjoying their weekend.

The Christmas holiday season is long over, the decorations have been taken down and a sense of normality has returned. In America, the song Black Or White by Michael Jackson is on top of the singles charts. Over in the UK, Bohemian Rhapsody by Queen is the number one hit song.

George W. Bush Snr. is currently the President of the United States and the movie Hook is at the top of the Box Office. In the United Kingdom, John Major is the current Prime Minister. In fashion, many of the trends from the late 80s are still popular. Colored tights, denim overalls, leotards, flannel shirts and shoulder pads are all fashionable at the moment.

On TV, people are watching popular shows such as "Who's the Boss?", "Married... with Children", "Blossom" and "The Fresh Prince of Bel-Air". Meanwhile, gamers are playing titles such as "Battletoads", "Sonic the Hedgehog", "F-16 Combat Pilot" and "Super Castlevania IV". Children and teenagers are currently watching television shows such as "Fireman Sam", "Count Duckula", "Rugrats" and "The Adventures of Tintin".

Popular toys at the moment include the likes of Transformers, Jenga, the Game Boy and Yo-yo.

George W. Bush Snr. was the President of the United States on January 12th, 1992.

John Major was the Prime Minister of the United Kingdom on January 12th, 1992.

Enter your date of birth below to find out how old you were on January 12th, 1992.

Here are some fun statistics about January 12th, 1992.

Leave a comment and tell everyone why January 12th, 1992 is important to you.