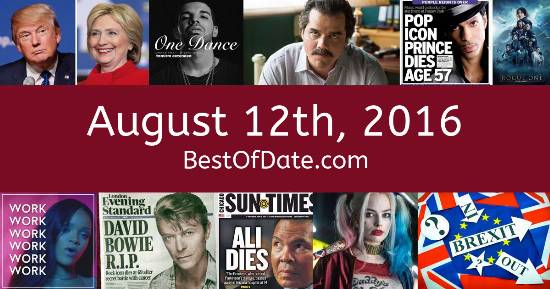 August 12th, 2016 relates to a fictional event in a movie, book, game or television series.

Songs that were on top of the music singles charts in the USA and the United Kingdom on August 12th, 2016.

The date is August 12th, 2016 and it's a Friday. Anyone born today will have the star sign Leo. Currently, people have "that Friday feeling" and are looking forward to the weekend.

It's summer, so the temperatures are warmer and the evenings are longer than usual. In America, the song Cheap Thrills by Sia is on top of the singles charts. Over in the UK, Cold Water by Major Lazer featuring Justin Bieber is the number one hit song.

Barack Obama is currently the President of the United States and the movie Suicide Squad is at the top of the Box Office. In the United Kingdom, Theresa May is the current Prime Minister. It's 2016, so the music charts are being dominated by artists such as Drake, Lukas Graham, Sia, Mike Posner, The Chainsmokers and Calvin Harris.

The 2016 Summer Olympics are currently taking place in Rio de Janeiro, Brazil. MMA fans are currently looking forward to UFC 202, where Conor McGregor will take on Nate Diaz in a rematch. In soccer, Everton defender John Stones has signed with Manchester City.

Toronto police have released a video showing the late Rob Ford smoking crack cocaine. The former Toronto mayor had passed away earlier in the year from cancer. On TV, people are watching popular shows such as "Homeland", "Peaky Blinders", "Making a Murderer" and "Stranger Things". Meanwhile, gamers are playing titles such as "Call of Duty: Black Ops III", "Overwatch", "Overwatch" and "PlayerUnknown's Battlegrounds".

Children and teenagers are currently watching television shows such as "Dora the Explorer", "Mickey Mouse Clubhouse", "Nicky, Ricky, Dicky & Dawn" and "Game Shakers". If you're a kid or a teenager, then you're probably playing with toys such as the PlayStation 4, the Xbox One, Star Wars BB-8 toy droid and L.O.L. Surprise!.

Barack Obama was the President of the United States on August 12th, 2016.

Theresa May was the Prime Minister of the United Kingdom on August 12th, 2016.

Enter your date of birth below to find out how old you were on August 12th, 2016.