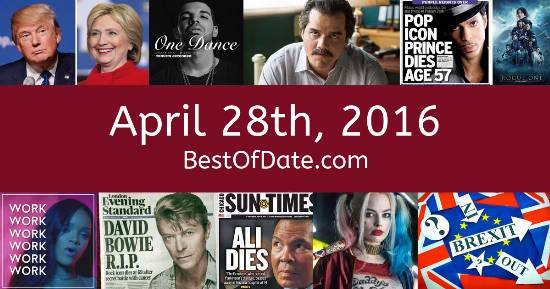 On April 28th, 2016, the following songs were at the top of the music charts in the USA and the UK.

The top "Box Office" movie on this date was the film "The Jungle Book".

The date is April 28th, 2016, and it's a Thursday. Anyone born today will have the star sign Taurus. The summer of 2016 is drawing closer and temperatures have started to rise.

In America, the song Work by Rihanna featuring Drake is on top of the singles charts. Over in the UK, One Dance by Drake is the number one hit song. Barack Obama is currently the President of the United States, and the movie The Jungle Book is at the top of the Box Office.

Wrestling fans are in mourning following the news that former WWF wrestler Chyna has died from an accidental drug overdose. The world is in shock following the sudden death of singer Prince. If you were to travel back to this day, notable figures such as Muhammad Ali, Kimbo Slice, Christina Grimmie and Fidel Castro would all be still alive.

On TV, people are watching popular shows such as "Bones", "The Walking Dead", "Suits" and "Making a Murderer". Meanwhile, gamers are playing titles such as "Grand Theft Auto V", "Dying Light", "Cities: Skylines" and "Metal Gear Solid V: The Phantom Pain". Children and teenagers are currently watching television shows such as "Dora the Explorer", "The Fairly OddParents", "Jake and the Never Land Pirates" and "Paw Patrol".

These are trending news stories and fads that were prevalent at this time. These are topics that would have been in the media on April 28th, 2016.

Check out our personality summary for people who were born on April 28th, 2016.

Iraqi President. Deceased
Born on April 28th, 1937
He was not alive on this date.

Barack Obama was the President of the United States on April 28th, 2016.

David Cameron was the Prime Minister of the United Kingdom on April 28th, 2016.

Enter your date of birth below to find out how old you were on April 28th, 2016.
This information is not transmitted to our server.